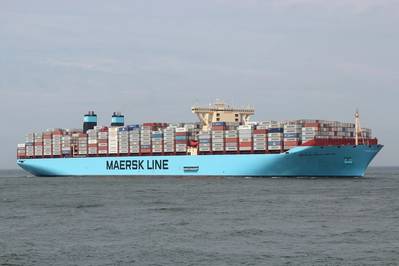 Maersk is accelerating its plan to transform itself from a container shipping giant into an integrated logistics company following its strong performance during the pandemic, Chief Executive Soren Skou said on Tuesday.

Maersk, which handles one in five containers shipped worldwide, aims to expand its land-based logistics services, hoping to gain a larger share of the supply chain from existing shipping clients such as Puma and Walmart.

"I don't want to put a date to it, but I'm certain that our logistics business has potential to become just a big as ocean shipping measured in turnover," Skou told Reuters in an interview.

While container shipping, which accounted for 73% of revenue last year, will continue to be at the centre of the company, land-based services such as shipments from factories, customs services and warehousing will be its "growth engine", Skou said.

"The pandemic has no doubt underlined the value for our customers of doing business with a company that can take responsibility for everything all the way from the factory to the end destination," Skou said.

Maersk is targeting like-for-like growth in its logistics business above 10% in the next five years, complemented by future acquisitions that could be in the magnitude of $1 billion, he said.

Last week, the Copenhagen-headquartered company posted record quarterly profit and said it expected the exceptionally strong performance to continue for the rest of the year, driven by high demand for containers to meet a surge in orders.

Skou told investors on Tuesday that he expected a return on invested capital (ROIC), a measure of how well a company uses capital to generate profit, above 12% from 2021 to 2025, compared with an average 2.3% in the previous five years.

The focus on land-based logistics could result in Swiss rival MSC overtaking Maersk as the world's biggest container liner during the second quarter of next year, said Hua Joo Tan, an analyst at shipping consultancy Liner Research Services.

"If MSC ends up having more capacity that we do, that's not the end of the world," Skou said. "That's not how we think about being No 1. Our focus is on having a much higher turnover per container that we ship."

Maersk owns or operates about 710 container vessels with a total capacity of 4.1 million containers and operates 66 container ports around the world.