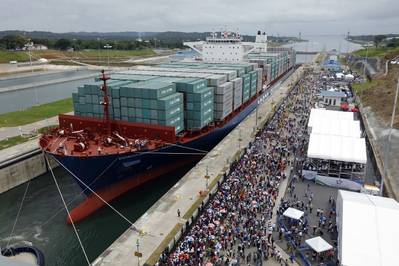 Today marks Panama Canal's two-year anniversary of the inauguration of its Canal Expansion. It is the largest enhancement project in the waterway’s 103-year history. To date, the Canal has transited 3,745 Neopanamax vessels.

The performance of the Expanded Canal’s Neopanamax Locks continues to exceed expectations. Over the past two years, the route has recorded milestones such as:

Increased experience with the Neopanamax Locks and continued investment into its operations have allowed the waterway to provide additional capacity, flexibility and efficiency to shippers. Such recent offerings include:

The impact of the Neopanamax Locks is demonstrated across all sectors, especially in LNG. In the past two years, this segment has seen:

Moving forward, the Canal's LNG traffic is expected to grow by 50 percent by the end of FY 2018 compared to FY 2017, increasing from 163 to approximately 244 transits.