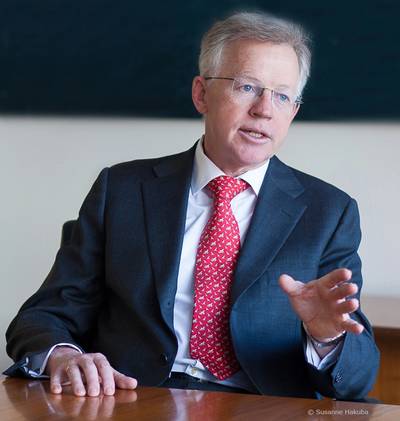 Award to be presented March 23, 2016 at the conclusion of the CMA’s Shipping 2016 Annual Conference and Exposition.

Mr. Paddy Rodgers, CEO of Euronav NV has been named as the Connecticut Maritime Association (CMA) Commodore for the year 2016. Rodgers follows a long succession of influential maritime industry leaders as Commodore.  The 2016 Commodore Award will be presented on March 23, 2016 at the Gala Dinner marking the conclusion of the annual Connecticut Maritime Association conference and trade exposition, at the Hilton Hotel in Stamford, Connecticut, USA.

The Award is given each year to a person in the international maritime industry who has contributed to the growth and development of the industry.

Paddy Rodgers has been Chief Executive Officer of Euronav since 2000 serves and has served on the Board of Directors of Euronav since June 2003 and has been a member of the Executive Committee since 2004. His perseverance, energy and articulate telling of the Euronav value story led to the successful listing of the company on the NYSE in January 2015. Euronav continues to have a listing on Euronext where it has been trading since December 2004.

Mr. Rodgers currently serves as a director and Chairman of the International Tanker Owners Pollution Federation Fund and has been a director since 2011. Mr. Rodgers began his career as a lawyer starting practice in 1984 with Bentley, Stokes & Lowless and in 1986 he moved to Hong Kong where he worked for Robert Wang & Co and then Johnson, Stokes & Master

Ian Workman, President of the CMA, upon making the announcement, stated, “The CMA is honored to present Mr. Paddy Rodgers with the 2016 Commodore Award. We have been doing this for over twenty-five years now and his corporate achievements, personal efforts to communicate the best version of the industry and his past generous support of our community combines as in a perfect storm of enthusiastic support.”

About Euronav
Euronav is a vertically integrated owner operator and manager able to provide complete shipping services in addition to its fleet of 54 modern large tankers. The crude oil seaborne transportation market is cyclical and highly volatile requiring flexible, proactive management of assets in terms of fleet composition and employment.

Euronav increases exposure to the market through opportunistically entering the market by chartering vessels from other owners and tonnage providers whilst maintaining a core fleet of high-quality owned or controlled tonnage. The Euronav core fleet has an average age of a little less than 8 years.

Euronav operates its fleet both on the spot and the period market. Most of Euronav's VLCCs and 1 V-Plus are operated in the Tankers International pool. Euronav also operates in-house a fleet of 22 Suezmax vessels on a mix of spot market exposure and time charter..

Euronav can also supply and operate Floating, Storage and Offloading (FSO) vessels through conversion or newbuilding. Currently Euronav has 100% operational control of a joint venture operation with 2 FSO’s in the Al-Shaheen field 90 miles off the coast of Qatar. Fleet management is conducted by three wholly owned subsidiaries Euronav Ship Management SAS and Euronav SAS, both French companies with headquarters in Nantes, France and with a major branch office in Antwerp, Belgium and Euronav Ship Management (Hellas) Ltd. with branch office in Piraeus, Greece. The skills of its directly employed seagoing officers and crew and its shore-based staff, including captains and engineers, give Euronav a competitive edge in high-quality design, maintenance and operation.

About the CMA
The Connecticut Maritime Association is a non-profit organization built by its members for its members. It is an Association made of individuals representing every aspect of shipping and international trade. The CMA Education Foundation is one of the largest providers of scholarships, academic prizes and internship supports in the US.

About CMA Shipping 2016
For the past 31 years the Connecticut Maritime Association has convened a trade show and conference in Stamford, Connecticut that has dealt with the commanding issues of the day, provided a dynamic commercial market place for products and services and brought together the international leaders of the shipping industry to seriously address opportunities and challenges from environmental regulations to major commercial developments.  Proceeds from the Show support the CMA Education Foundation.