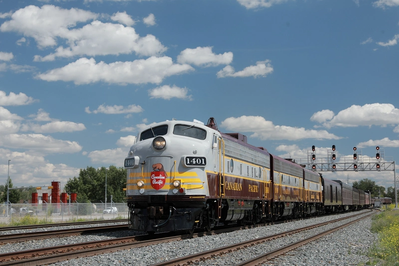 Talks between Teamsters Canada and Canadian Pacific are ongoing and the labour union is working with federal mediators to reach a negotiated agreement, Teamsters said on Tuesday, adding that commuter train services will not be affected.

Industry bodies representing the mining, aluminium and fertilizer industries said the strike would hurt their operations.

Fertilizer Canada asked the government to take steps to mitigate the impact of the strike in the middle of the spring planting season.

Though the strike will not hurt commuter train schedules, it comes at a time of tighter rail capacity in Canada, with CP and rival Canadian National Railway facing strong demand for shipments of grain, potash and other commodities.

"Even without the tightness in the market, alternative modes of transport wouldn't be able to make up for the loss of Canadian Pacific's capacity," analyst David Tyerman of Cormark Securities Inc said.

Canada's mining and aluminium associations also said the strike would have a significant economic impact on their industries, and urged the Canadian government to help resolve the issue.

Prime Minister Justin Trudeau said in an interview with Bloomberg on Tuesday his government believes in the right to strike and would not intervene, as his predecessor had, "early and often" in labour disputes. But he would not rule out back-to-work legislation.

"We believe in working things out at the bargaining table ... and we'll use all sorts of levers to enforce that."

Canadian Pacific did not respond to a request for comment on Wednesday.

The company reached an agreement with unions in April to postpone a strike, which would have been the third in six years at the railroad.

The strike comes at a time of tighter rail capacity in Canada, where CP and rival CNR are facing strong demand for shipments of grain, potash and other commodities.