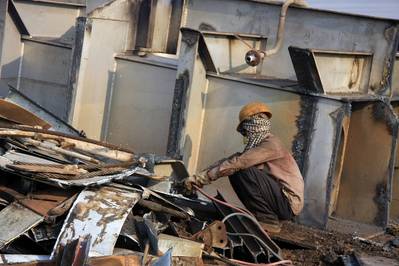 The outlook for India's ship-breaking industry has turned negative amid volatile scrap prices and a falling rupee, says ICRA.

The country's ship-breaking activity, while tepid during CY2019 due to subdued demand and depressed scrap prices, gathered momentum at the start of CY2020 following the implementation of the International Maritime Organization (IMO) sulphur cap regulations from January 2020. But weakness in the international shipping markets further aggravated by the coronavirus has since dampened sentiments. The COVID-19 pandemic has not only exacerbated the freight market but has also placed restrictions on vessels coming in and out of virus hit nations, as well as the trade routes; and deliveries in the region, thus adding to ship owners and buyers’ woes.

Mayank Agrawal, Assistant Vice President, ICRA, said, “The industry players are facing turbulent times currently with volatile scrap/steel plates prices, unfavourable foreign exchange rates and restriction on beaching of vessels, which will lead to increase in the procurement cost. This coupled with unsettling sales/scrap prices, the margins for ship breakers are expected to remain under pressure in the near term."

The availability of ships for recycling is inversely correlated to the freight rate of shipping vessels, which in turn is a function of the global demand for seaborne transport and supply of new vessels. A major portion of a ship breaker’s revenue comes from the sale of ferrous or mild steel (MS) scrap, the prices of which continue to remain subdued in the domestic market. The total tonnage demolished by India fell by 37% in CY2019 to ~14 lakh LDT against ~22 lakh LDT in CY2018.

Suprio Banerjee, Vice President and Head, Mid-Corporate ratings, ICRA, said: “Any meaningful recovery of scrap prices in the domestic market and stable foreign exchange rates thus remain important, given that the freight markets are expected to continue to suffer leading to steady flow of tonnage for recycling in the near term.”

ICRA expects operating profitability margins will remain at subdued level due to limited value-added nature of operations, stiff domestic as well as international competition, volatile scrap price, increase in cost of procurement due to depreciating rupee against the U.S. dollar.

ICRA also sees certain developments as long-term positives for the industry. The Government of India ratified the Hong Kong Convention (HKC) in November 2019 and the Ship Recycling Act was enacted in India to give effect to the provisions of the HKC in December 2019. The implementation of this Act will streamline existing ship-recycling norms and help in the restriction/proper treatment of hazardous materials on board and the waste produced, post recycling. It will raise the profile of the Indian ship-recycling industry as being environment-friendly, and safety conscious and will go a long way in establishing India’s position as the market leader.

“Enactment of the Ship Recycling Act, has proved to be a silver lining,” Agrawal said. “In the near to medium term, the compliance and capex cost for recyclers to comply with the HKC may increase, but the same is expected to be neutralised by higher volumes and competitive procurement costs in the long term.”

Regarding the financials, the operating profit margin for the Indian ship breakers has remained low (average 1-2%) during the past few years because of the low value addition, stiff competition from the domestic as well as the competing countries’ players in Pakistan, Bangladesh, China, and Turkey and volatile scrap prices. The margin is also vulnerable to foreign exchange rate fluctuations as purchase transactions are denominated in the USD. Purchase of ships is generally backed by a Letter of Credit (LC) in India. Tightening of banking norms for issuance of LCs to purchase ships, is further adding up to the challenges faced by the Indian ship recyclers.