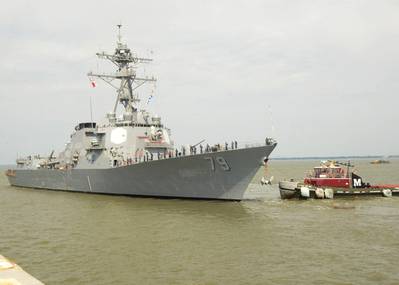 The ship will conduct maritime security operations and provide theater security cooperation efforts within the AOR.

The crew recently participated in Baltic Operations 2014, a multinational exercise in the Baltic Sea. Exercise goals were to improve maritime safety and security through increased interoperability and cooperation among participating nations.

"The crew has worked hard to prepare this ship for deployment," said Cmdr. Russel Sanchez, Oscar Austin's commanding officer. "While leaving family and friends during the holiday season can be challenging, our Sailors have been trained to execute the mission safely and efficiently."

Named for Medal of Honor recipient, Pfc. Oscar P. Austin, United States Marine Corps, the ship was commissioned Sept. 18, 1993. Austin earned the Medal of Honor when, on Feb. 23, 1969, his observation post was subjected to a fierce ground attack by a North Vietnamese forces. When one of his companions fell unconscious, dangerously exposed to hostile fire, Austin left the relative security of his fighting hole and raced to transport the Marine to cover. As Austin neared the fallen Marine, he saw an enemy grenade land nearby and leapt in front of the injured Marine, absorbing the effect of the detonation. When Austin reached his fallen comrade, he saw a North Vietnamese soldier aiming a weapon at his unconscious companion. With full knowledge of the probable consequences Austin threw himself between the casualty and the hostile soldier and, in so doing, was mortally wounded.

U.S. 6th Fleet, headquartered in Naples, Italy, conducts a full range of maritime security operations and theater security cooperation missions in concert with coalition, joint, interagency, and other partners in order to advance security and stability in Europe and Africa.