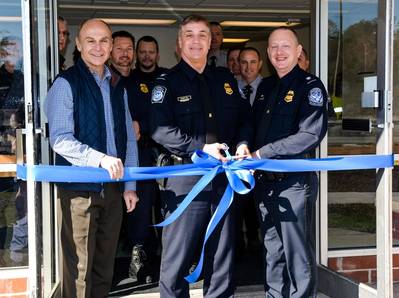 U.S. Customs and Border Protection (CBP) has opened an office on-terminal at the Port of Wilmington, in North Carolina.

North Carolina Ports leaders welcomed CBP officials Tuesday to celebrate the opening of the office which will support the agency’s efforts in the security of cargo movements through the Wilmington terminal.

Paul J. Cozza, Executive Director, North Carolina Ports, said, “CBP has long played an important role in the safety and security of our facilities. This new space puts CBP closer to their responsibilities and allows the agency to sufficiently fulfill its duties which are critically important as cargo volumes grow through North Carolina’s ports.”

“The completion of this project highlights the valuable partnership between U.S. Customs and Border Protection and the North Carolina State Ports Authority,” added Scott J. Opalka, Port Director, U.S. Customs and Border Protection. “We have a common interest in ensuring the security and economic prosperity of the United States and with the space provided by NC Ports, it will help CBP achieve these goals.”

CBP provides border security including daily, port-specific operations like clearing cargo, collecting duties and other monies associated with imports, as well as enforcing import and export laws and regulations, and performing agricultural inspections to protect the United States from potential carriers of animal and plant pests or diseases.