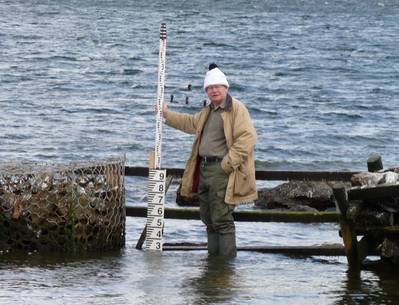 A photograph by Philip Woodworth showing David Pugh doing what he enjoyed most – making temporary sea level measurements – in this case in the Falkland Islands in 2009. Photo courtesy NOC

To celebrate his significant contributions to the global marine community, his friends and colleagues at the NOC have compiled this downloadable Synopsis of David’s life in science.

David Thomas Pugh was born in wartime on July 13, 1943. Although his birthplace was Liverpool, where his father was a police officer, the family moved shortly afterwards to Trefnanney in Powys where his two parents taught at the same school. He was an undergraduate at University College London and was awarded a PhD in Geodesy and Geophysics from Cambridge University in 1968. His thesis was entitled ‘The Thermal Environment of the Deep-Sea Floor’. This work involved David in his share of sea-going, in the company of scientists from the National Institute of Oceanography at Wormley, and it led to a Nature paper on hot brines in the Red Sea in 1967. He never lost interest in the topic of geothermal heat fluxes in the ocean and lakes, and returned to it in several later publications, the last being a study of Patagonian lakes (with Liverpool University) in 1998.

After graduating, David did a variety of research for the Ministry of Defense. However, in 1969 he joined what came to be called the Proudman Oceanographic Laboratory (POL) at Bidston Observatory in Wirral. His work at POL involved many aspects of sea-level science. As part of an extensive study of the accuracy and reliability of pressure tide gauges, he developed a new instrument called a ‘bubbler gauge’ which continues to this day as the main technology for measuring sea levels around the UK. He made measurements (with Ralph Rayner) of the tides of Indian Ocean atolls. He studied (with Graham Alcock) how geodetic levelling connections can be made at sea. He developed new methods (with Ian Vassie) for the parameterization of extreme sea levels in terms of ‘joint probabilities’. He also replaced Geof Lennon as Director of the Permanent Service for Mean Sea Level (PSMSL), the global data bank for sea level measurements. David (together with Klaus Wyrtki at Hawaii) realized that, if the PSMSL data bank was to develop as one would like, then considerable further efforts in monitoring had to be made at intergovernmental level. This led to his proposal for the Global Sea Level Observing System (GLOSS) of the Intergovernmental Oceanographic Commission (IOC), a UN body with well over 100 member states, in which countries were required to make formal commitments for monitoring sea levels and for delivering data to the PSMSL.

In 1984, David’s career changed direction into scientific management after he became Head of Oceanography, Hydrology and Meteorology for the UK Natural Environment Research Council (NERC). A part of that work involved serving as Secretary to the UK Government Inter-Agency Committee on Marine Science and Technology (IACMST) from the early 1990s until 2003. This committee was created to improve coordination of UK marine science and technology, which until then was distributed across many arms of government, academia and industry. Unusually, responsibility for the committee was devolved from a government department to NERC. David ensured that it became more than a talking shop, with many initiatives, including integration of observation programs, and the sharing of UK marine environmental data. Although IACMST funding was limited initially, David developed ways to use advisers, consultants and project-specific funding effectively in order to accelerate progress.

However, David continued to spend considerable time working on international aspects of oceanography, including leading the UK delegation to IOC Assemblies. Again, responsibility for this role was devolved to NERC and careful liaison with government departments was necessary. His skills and knowledge were noticed, and he later became Chairman of IOC in 2003-2007. Aspirations and resources varied widely across member states, and his role required diplomacy and tact as well as assertiveness. It also entailed significant international travel, something which David enjoyed. He contributed much to the planning of IOC’s 50th anniversary in 2010 and, linked to this, co-edited (with Geoff Holland) the book Troubled Waters, which not only traced the history of IOC but identified the challenges facing international marine science and IOC’s position within the UN system. The book nicely explained how governments use science to establish ocean policies in issues such as marine pollution, exploitation and hazards.

David’s role in IOC took him to an international meeting Iceland in 2001 where he survived what could have been a serious car accident. He and a colleague (Trevor Guymer) were driving on an elevated road when the car somersaulted and finished on its roof. David had to make an ignominious exit through the rear window clutching a small but treasured suitcase that had accompanied him for many years of international travel. Already rather battered beforehand, it was now completely unusable, and he ceremoniously dumped it in a bin at the hotel where he arrived many hours later with no discernible injury to himself.

David also played several other important international roles. One was as chairman of a Commission on Sea Level and Tides for the International Association of Physical Sciences of the Oceans. In addition, he was chairman of a body for international data called the Federation of Astronomical and Geophysical Data Analysis Services, now part of the World Data System. For all of this work, national and international, he was appointed an Officer of the Order of the British Empire (OBE) in 2003.

In spite of the time spent on these science management roles, David’s interest in all aspects of sea-level science (tides, surges, mean sea level, coastal management and climate change, the economics of marine activities, and the history of sea level research) were maintained. In 1987, he published the first of his books on ‘Tides, Surges and Mean Sea-Level’ which has been used by an enormous number of researchers and students. This was followed by a second book in 2004, on the same topics but written in a somewhat different style. A third book on sea-level science (with Philip Woodworth) was to follow in 2014.

It might be said that David re-blossomed as a scientist after retirement. He had a long-standing interest in the way that historic sea level data measurements, however short, could be used to provide information on long-term sea level change. Such measurements are especially useful if they were made relative to geodetic benchmarks which survive to the present day, and which can also be used as a height reference for modern sea level measurements. David undertook such research in Tasmania and the Falkland Islands and at a number of locations around the UK and Ireland. His most recent publication on this subject (to do with sea levels at Cork) dates from 2021. He had a particular skill in tracking down important historical benchmarks that are located on old walls and buildings but are hidden beneath their more recent pebbledash renderings.

Another of his interests was in high-frequency fluctuations of sea level called seiches, in which he made extensive use of temporary deployments of compact and relatively inexpensive tide gauges. In fact, David became an expert in the use of such instruments. Papers were published by David and colleagues on seiches at Indian Ocean islands and Sri Lanka. A recent example of such work dates from 2020 and concerned the Shetland Islands where seiches are endemic to every inlet. Many have periods around half-an-hour which led David to propose a theory (still to be properly worked up) that coastline and bathymetry evolution lead naturally to such a timescale. Compact tide gauges were also used by David and Isabel Araújo to measure tidal and non-tidal variability in Portugal, with Philip Woodworth to measure the tides of Loch Ness (published 2011), and by David and colleagues in measurements of the tides in the Red Sea (a region in which he maintained a great interest) leading in 2019 to a definitive paper on the tides of the area.

Most recently, he spent considerable time with colleagues at Maynooth University and other Irish institutes in studies of changes in tides and sea levels around Ireland. Long before (published in 1982), David had considered how tides and sea levels might have changed at several locations in Ireland where Sir George Biddell Airy had made measurements in 1842. Now, in retirement, David had realized that considerably greater use could be made of the Airy and other historical Irish data sets to learn more about changes around the whole Irish coast during the past two centuries. This renewed interest coincided with the recent development of an excellent Irish sea level monitoring network, and since then the common interests of the various players involved in Irish sea levels has led to the formation of an active sea level research community. David co-organized a meeting of this group in Galway in May of this year.

David was a fine scientist who nevertheless saw the need to have his career digress into science management to serve the wider marine community. Personally, he was a kind man who was willing to chat about any subject under the sun and was an excellent companion on field work. He had a great, if somewhat sardonic, sense of humor, and a fund of anecdotes and jokes. He was an active member of Chester Golf Club, a watcher of cricket (a member of Lancashire Cricket Club) and football (an Everton supporter). He was also a keen photographer and walker. As mentioned above, he was very proud of his Welsh roots and in particular his relatives in the Welsh community in Patagonia. David died while on a walking trip in Wales.

David is survived by his wife Carole, whom he met at Bidston Observatory, his son Gareth, and by many friends and colleagues in different countries.