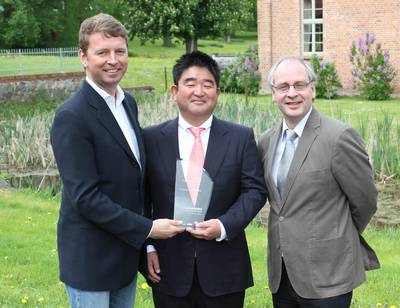 Tatsuo Nishikawa has been announced as the winner of the DNV GL COMPIT Award 2015. The Japanese CFD (computational fluid dynamics) expert, working for the Shipbuilding Research Centre of Japan in Tokyo, was honoured for his paper’s contribution to the use of high-performance computing in the maritime industry, at the COMPIT Conference which took place from 11 to 13 May in Ulrichshusen, Germany.

Since the turn of the century, the sharp end of computing power has been transformed by the rise of massively parallel computers with tens of thousands of processors and millions of individual cores. This new architecture has been especially valuable in allowing experts working in shipping to run Computational Fluid Dynamics (CFD) calculations to simulate vessel hydrodynamic performance more accurately than ever before, in less time.

In Dr Nishikawa’s paper “Application of Fully Resolved Large Eddy Simulation to Self-Propulsion Test Condition of Double-Model KVLCC2”, he presents numerical ship propulsion tests performed on Japan’s K-computer, currently the fifth largest computer in the world, using 60 billion cells and 200000 cores in parallel. This is some 10,000 times the number of cells and cores available to even the most powerful computing clusters currently used in industry applications.

“Dr Nishikawa’s paper gives us a preview of what we can expect to see in CFD as we are able to access greater computing power over the coming years. It is like a look into the future, as we go from having teraFLOPS to petaFLOPS, even exaFLOPS of power at our disposal,” said COMPIT organiser Volker Bertram, DNV GL. “Over the next 10 to 15 years the industry will begin to have comparable processing capability at our disposal and will benefit from Dr. Nishikawa’s pioneering work.”

The jury singled out Dr Nishikawa, from a short list of several highly qualified candidates, because his paper gives a preview of how massively parallel computing could further enhance efficiency in ship design. While despite the specialized competence in ship hydrodynamics demonstrated, the paper remains readable, understandable and relevant to a wider audience. His work also uses technology at the edge of innovation to make ships greener, reflecting one of DNV GL’s core values.

COMPIT is the abbreviation for “Computer Applications and Information Technology in the Maritime Industries“. The conference, which took place for the fourteenth time, offered information on advanced IT applications for the lifecycle of ships and offshore structures. Topics such as “Simulation-based Design”, “3D Hull Models”, “Towards Unmanned Ships” and “Big Data & Performance Insight”, amongst others, were discussed by the participants. As in previous years, DNV GL was a main sponsor of this event.

This is the eighth time that an outstanding scientist has been presented with the DNV GL COMPIT Award at this prestigious conference. Previous winners of the award are: