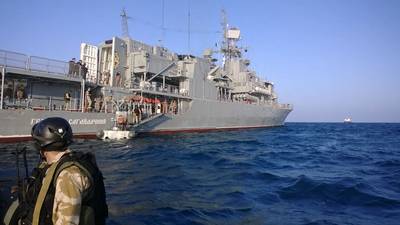 NATO is sending part of its naval rapid reaction force to the Baltic Sea as part of measures to step up the defence of its eastern European allies in response to the Ukraine crisis, the alliance said on Thursday.

A multinational group of five small ships - four minesweepers and a support vessel - will be sent to the Baltic Sea "for the foreseeable future", a spokesman for NATO's Maritime Command said.

NATO has made clear it does not plan to get involved militarily in Ukraine, which is not a NATO member.

But it said on Wednesday it would send more ships, planes and troops to eastern Europe to reassure allies worried by Russia's annexation of Ukraine's Crimea region.

The ships from Norway, the Netherlands, Belgium and Estonia make up one of four NATO naval groups that the alliance has available as an immediate reaction force.

The NATO "mine counter measures" group had been inactive since January but was called back to duty last week by U.S. Air Force General Philip Breedlove, NATO's top military commander.

"During this period of tension, we felt it appropriate to deploy (the group) to the Baltic Sea as part of a broad package of actions by NATO's maritime, air, and ground forces," Breedlove said in a statement.

The ships, now assembling in the German port of Kiel, will visit Baltic ports and take part in a previously scheduled exercise next month to hunt for mines and torpedoes from both world wars.

NATO has already said it will triple its usual number of fighter jets patrolling over the Baltics from next month as part of steps to beef up its eastern European defences.

NATO is planning to boost its defences through a series of temporary deployments of military forces and exercises but has so far shied away from new permanent bases in the east as Poland wanted.

Russia says deployment of significant NATO forces in eastern Europe, close to Russia, would violate the 1997 Founding Act, a cooperation agreement between Moscow and the alliance.