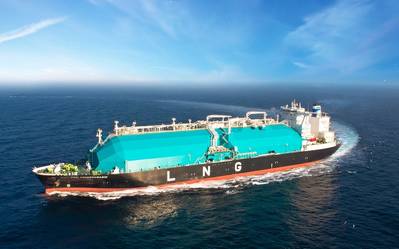 One of MISC's LNG carriers at sea (CREDIT: MISC)

MISC has announced its financial results for the financial period ended March 31, 2019.

Group Revenue, Operating Profit and Profit Before Tax for the Quarter Ended March 31, 2019
Group revenue for the quarter ended March 31,2019 of $544 million was 12.7% higher than the corresponding quarter’s revenue of $482 million. The increase in Group revenue was contributed by the improved freight rates recorded in the current quarter for Aframax, Very Large Crude Carrier (VLCC) and Suezmax vessels in the Petroleum segment. Additionally, Heavy Engineering revenue also increased resulting from higher completion progress of ongoing projects. Higher number of operating vessels in the LNG segment also attributed to the higher revenue in the current quarter.

This increase however was reduced as Heavy Engineering segment recorded higher unabsorbed overheads as expected contract awards have yet to materialize. The Offshore segment also recorded lower operating profit due to the inclusion of construction gain from FSO Benchamas 2 in the corresponding quarter’s results.

Group profit before tax of $129 million was higher than the corresponding quarter’s profit before tax of $76 million following the higher operating profit as explained above, gain on acquisition of a business and gain on disposal of a ship. However, this increase was offset with higher finance costs due to the increase in borrowings.

In the LNG shipping segment, spot charter rates have eased off in Q1 2019 on the back of diminishing winter demand and new tonnage delivery, after a historical winter peak towards the end of 2018. In the second half of 2019, tanker deliveries are expected to slow and new liquefaction capacity will likely help keep rates afloat. Two new LNG carriers have joined MISC’s fleet at the end of 2018 and early 2019, providing a source of income growth for the segment. These additions and the existing portfolio of long term charters that are in place will underwrite a steady performance for MISC’s LNG business for the year.

The Offshore segment continues to be supported by healthy activities in oil and gas exploration and production.  An increasing number of opportunities are present in the global offshore exploration and production space, especially for developments within the Atlantic Basin, and MISC’s Offshore business unit will be actively assessing the merit of pursuing these opportunities in the current year. Our existing portfolio of long term contracts will also continue to support the stable financial performance of the Offshore business segment.

The Heavy Engineering segment is expecting to see more dry docking activities at its yard in view of encouraging growth in global sea trade. As more orders for LNG repairs have been received compared to last year, the segment is positive in maintaining the current level of marine repair activities for this year. The segment had secured an award of a long term plant turnaround and maintenance services contract by Petronas, a new service that provides recurring orders in support of business sustainability. As the industry outlook continues to be challenging in the current financial year, the Heavy Engineering segment remains cautious and committed to replenish its order book, not only from the domestic market but also various geographical areas.