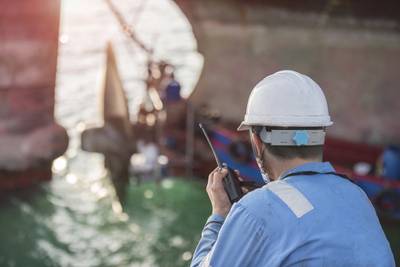 The American Maritime Partnership today announced the launch of the Military to Maritime digital career platform (www.militarytomaritime.org), which is dedicated to helping veterans find meaningful, family-wage jobs in the maritime industry while supporting America’s national and economic security.
Building on the numerous Military to Maritime career fairs across the country, the enhanced digital platform connects veterans with career opportunities in the U.S. shipbuilding and maritime industry and provides training and credentialing information to help in their transition from military service to the maritime sector. U.S. maritime industry employers can upload their job openings to this website, and veterans and active military can search the hundreds of maritime-related careers currently posted.
“The Jones Act is a de facto layer of our national security. U.S. shipyards build, repair, maintain and modernize the largest and most sophisticated Navy and Coast Guard vessels in the world, and do the same for the nation's 40,000 commercial vessels. The U.S. military, the most powerful military in the world, relies on U.S. flag vessels crewed by U.S. civilian mariners,” said Rear Adm. Mark H. Buzby, Administrator of the U.S. Maritime Administration. “As part of our coordinated effort across the U.S. Navy’s Military Sealift Command, the U.S. Coast Guard, and the commercial maritime industry, the Maritime Administration is working to make it easier for transitioning veterans to obtain their mariner credentials based on their service experience. In addition, MARAD supports all educational and training resources to support veterans as they transition from the military into a new, fulfilling career as a licensed mariner.”
In times of need, America's commercial fleet and mariners provide sealift capacity to move troops and cargoes – sometimes at a moment’s notice. Sustaining a ready reserve force equipped with U.S.-flagged vessels and American civilian mariners is vitally important for the nation’s security, the American Maritime Partnership said.
Congressman Duncan Hunter (R-CA), Chairman of the Subcommittee on Coast Guard and Marine Transportation and a Marine veteran of the wars in Iraq and Afghanistan, has been a long-time champion for the hiring of veterans into meaningful maritime careers.
“Mariners in the Armed Forces have skills that can successfully translate into the civilian workforce. Military mariners just need to know about what civilian opportunities are available and how they can attain the proper certificates during their military career to successfully transition into a civilian career,” said Chairman Hunter at a recent House Subcommittee on Coast Guard and Maritime Transportation hearing.
“The current cadre of mariners which have served the commerce and national security of the United States so admirably since the end of the Vietnam War is quickly aging out along with the ships. It's imperative that the federal government, along with its partners in the state maritime academies and maritime unions, develop a comprehensive plan to ensure that the absence of qualified and experienced mariners in the workforce does not become an Achilles’ heel limiting our military sealift operations and our national security,” said Congressman John Garamendi (D-CA), who has continuously championed the importance of commercial mariners for national security.
As veterans consider career paths following their military service, the maritime industry presents numerous opportunities that build on their valuable skills and dedication to America’s security. While those with seagoing experience can get a head start on many careers in the domestic maritime industry, there are many career opportunities that do not require prior seagoing experience. Many companies provide all the training needed for vessel employees as well as offer a variety of shore-based career paths.
“The American maritime industry is committed to supporting and hiring veterans. Over recent years, we have hosted job fairs across the nation for our veterans – and are excited to take this a step further through our new online platform,” said Matt Woodruff, AMP Chairman. “We know the vital role our industry serves for national and homeland security purposes – and remain dedicated to hiring veterans that share in our commitment to mission, teamwork, and service.”
The American maritime industry supports nearly 500,000 jobs, contributes $92.5 billion to the U.S. economy and provides $29 billion in annual wages. U.S. shipyards build, repair, maintain and modernize the largest and most sophisticated Navy and Coast Guard vessels in the world and do the same for the nation’s 40,000 commercial vessels. More than 937 million tons of cargos, including grain, coal, petroleum, consumer goods and crude materials, are moved annually by the U.S. maritime industry in order to sustain our nation and support fundamental U.S. industries.
• Afghanistan • America • Duncan Hunter