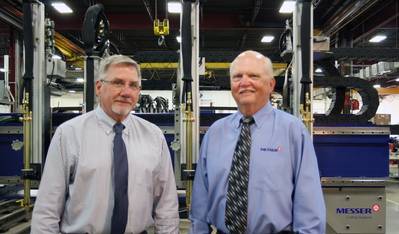 Gary Norville started at Messer Cuttings Systems Inc. in September 1980 selling and installing cutting machines. Norville worked in many different departments during his career with Messer, gaining vast knowledge of the company while working his way up the corporate ladder, eventually earning the position of President and CEO in 2007. Messer announced today that Norville’s last day will be August 29, 2014.

“If you work over the years in several different positions in a company, you cannot help but ask yourself…how do I see the future development of this organization? I had a defined vision of growth for Messer and thanks to the opportunity of being president for more than seven years, I could implement this vision with my team and together we saw a growth of 40% which exceeded financial expectations.” Norville said.

To achieve and build on this success, Gary has always looked for staff who take pride in their work, are determined to succeed, and have an “I can do this” attitude. Norville explained, “An essential factor in the positive development of Messer was that we have grown together as a team. My motivation was summed up by one of the great football coaches of our time, Vince Lombardi of the Green Bay Packers, who’s moto was “Winning isn’t everything–it’s the only thing."

Effective September 1, 2014, Bill Heller will be the new President and CEO of Messer Cutting Systems, Inc. For the past five years, Heller has held the position of Technology Products Sales Manager for laser machines. Heller graduated from at Mt. Union University in Ohio with a business degree and has more than 37 years in the welding and cutting field with a focus on robotic automation.

Gary Norville wishes Bill Heller and Messer Cutting Systems continued success. “Bill Heller has a vision of growth and profitability. Messer is already starting to implement his plans. He has everything necessary for success including a motivated and strong team.”

Norville wants to use his retirement to travel, spend quality time with his family, playing golf and purchase "A muscle car from the golden era – a 1969 Chevy Malibu SS 396.