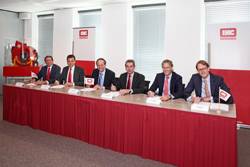 IHC Merwede has recently increased its underwriting capacity by more than 50 percent to nearly $2.2 billion. Of this amount, over $1.3 billion has been committed. The financial agreement has been forged between IHC Merwede and an international banking consortium made up of five banks, with the aim of facilitating international growth. The five banks which form the consortium all have large international networks. Three of the five – ABN AMRO, ING and Rabobank – were chosen for their proximity to IHC Merwede’s Netherlands-based business. The two foreign banks are the French BNP Paribas, and the German Deutsche Bank. The lenders have jointly facilitated the $2.2 billion sum, which will be used by IHC Merwede for guarantees, investments in long-term assets and acquisitions. Most importantly, the money will also enable IHC Merwede to finance vessel construction.
www.ihcmerwede.com