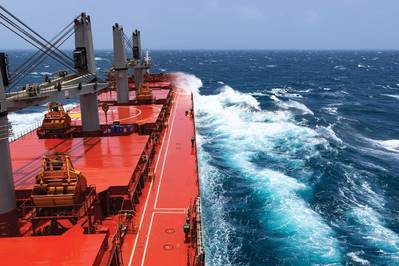 MRS 2019 will bring together academics, government and commercial entities to discuss the threats, challenges and risks associated with the Marine Transportation System with a focus on current and future marine transportation challenges and threats. The symposium will assess threats – such as cyber security, vulnerabilities and recent advancements in research – to inspire ideas for innovative research that will help define the next evolution within marine transportation.

Why is this issue important? The idea of assessing and quantifying the various threat vectors associated with the Marine Transportation System is an issue that has come front and center since the horrific attack of 9/11. State and non-state actors understand the vulnerabilities within a global system that moves trillions of dollars of goods annually. Complicating this issue are growing threats to the system’s cyber components, the dawn of autonomous shipping, electronic navigation, advances in fuel systems and the continued automation of the nation’s ports.

The 9/11 Boat Lift from Manhattan Island – completed predominately by tugs and ferries – is the largest marine rescue in history, rescuing 500,000 New Yorkers. Superstorm Sandy paralyzed New York in 2012 – and again, it was the Marine Transportation System that answered the call, delivering needed supplies when shore side transportation was shut down by the devastating storm. The Marine Transportation System continued its efforts for months following Superstorm Sandy, playing a major role in debris removal and infrastructure redevelopment. This system meets our nation’s needs in peace and in times of peril. In order to be effective, though, the system requires safe and sound policies regarding navigation safety, anchorages, maintained and clear channels, port state control, traffic mix, intermodal connectors, and much more.

The issues slated for the 2019 event are as important in the United States as they are internationally. “It is perhaps more crucial now than ever before for us to look at the broad spectrum of risks to the maritime industry, from international relations to climate change,” commented Canadian Capt. Todd Bonner, currently stationed at Combined Joint Operations from the Sea COE in Norfolk, Virginia. “Any operational disruptions in maritime transportation have wider second and third order consequences for society, making the management of the associated risks a priority that should transcend industry and national boundaries. Clearly, an increasingly connected world requires the comprehensive maritime community response to the many interconnected risks in the maritime commons that will be identified and discussed at MRS 2019.”

According to Retired Coast Guard Vice Adm. Rob Parker, who has previously served as the Master of Ceremonies for this event and currently serves as the senior mentor to the symposium’s Program Committee, “MRS has focused on some critical issues since the first event at the University of Southern California back in 2010. It has also grown in scope and impact.” The former Coast Guard Atlantic Area Commander continued, “I like the depth in which the symposium covers an issue. This has led to research questions in the academic community, articles, and injects into issues that policy makers consider.”

This year’s MRS will feature a wide range of leaders from the federal government, to academia, to think tanks and industry. Keynote speakers include: Retired Rear Adm. Mark “Buzz” Buzby, who is the administrator of the Commerce Department’s Maritime Administration, and Rear Adm. Andy Tiongson, commander of Coast Guard District One. Maritime College President Rear Adm. Michael Alfultis will also deliver an address on “Educating the Future Maritime Workforce in a Sea of Constant Disruptors and Change” and stated, “Considering the accelerated changes occurring in the maritime and transportation industries within the areas of digitalization, autonomy and data analysis, this symposium provides an essential venue for discussing threats, vulnerabilities, and recent advancements to marine transportation system risk research, and inspiring ideas for innovative research that will define the next generation of maritime risk.”

The 2019 event features panels led by national thought leaders including the RAND Corporation’s Dr. Henry Willis. The symposium’s collaboration with the National Academy of Sciences (NAS) has enhanced the national prominence of the event. Scott Brotemarkle of the NAS will lead a panel entitled “Navigation Risk to the MTS.”

Besides the symposium itself, the event will be host, for the second year in a row, to a Coast Guard “Evergreen” event. The Evergreen Program is the Coast Guard’s Strategic Foresight Initiative, tasked with looking over the horizon to inform current planning and better prepare the Coast Guard for an uncertain and unpredictable future. Through the use of scenario-based exercises and workshops involving a diverse group of stakeholders, common strategic needs or key success factors can be identified across multiple plausible scenarios to better inform long-term strategic planning efforts.

Evergreen results help shape the Coast Guard’s strategy development. Noted Cmdr. Kate Higgins-Bloom, director of Project Evergreen at Coast Guard Headquarters in Washington, D.C., “Project Evergreen has been running for about 20 years, but last year's MRS at Oak Ridge (National Laboratory) was the first time that the focus was not Coast Guard, but the whole maritime industry. MRS brought together a unique cohort of academics, industry leaders and public servants. The diverse group produced some really rich insights, informed by the broad range of perspectives. In this iteration, we are building on the success of last year to bring together industry, academia and government to tackle complex ‘collective action’ dilemmas.”

The event will also feature, for the fourth year in a row, a poster contest for both undergraduate and graduate students.
The MRS 2019 program includes a judged session the evening of Nov. 13 where posters developed by students are displayed, with the authors available to describe the reported work and answer questions from MRS attendees. Space for students and posters at MRS is limited, so selection to present in this session is competitive. In addition to best poster awards, after MRS 2019 there will be opportunities to develop and publish short papers based on the posters.

Posters may have only one author. An author should prepare a three-to-five-page proposal describing the proposed poster. The only programmatic requirement is that the proposal address the MRS 2019 theme of “Understanding and Managing Risks to the Maritime Transportation System”; the lens through which this theme might be approached could be economic, political, social or technical. Submissions may be made through the event web site: http://www.sunymaritime.edu/MRS2019
http://www.sunymaritime.edu/MRS2019


About the authors:
Dr. Joe DiRenzo is the director of Research Partnerships for the U.S. Coast Guard Research and Development Center. He is a frequent Marine News/Maritime Reporter contributor. Dr DiRenzo teaches for American Military University and Northcentral University.