Eye on Maritime Design: Can Wind Propulsion Work by Keeping it Simple? 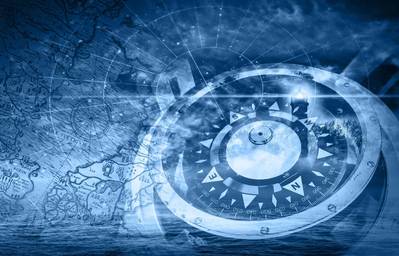 While it is starting to look like some clever wind/power sail technologies are starting to appear, too often I have looked at the cargo cranes of geared bulkers and wondered if it makes sense to rig some sort of sail on them.

I think the fancier approaches fight the “build a little, test a little, learn a lot” engineering maxim in new technology development, and maybe doing more simple stuff may be a better way to achieve lasting results quicker.

A recent conversation with a sustainable propulsion advocate compelled me to run a few numbers.

I found a bulker with a GA for a 2010 era 25,000 deadweight tonner that may work with appropriately positioned cranes and it even has a CPP. I drew in some sails that are set along a stay that is being held up by the cranes.

To make a prettier sail plan, get better balance, and to add some additional sail area, I also mounted a tripod mast on the No. 1 crane top to allow a proper headsail to be rigged.

This resulted in sail plan with about 13,600 square feet of fore and aft sail as shown.

Not exactly 12M sailboat pretty but not terribly bad looking either, but now we need to figure out if this is a realistic approach.
Let’s first consider operational realities.

These are sails with about 115 feet on the luff. Not a crazy size sail considering that there are many sloops sailing today that have headsails that size and much larger.

To set sail, the crew will deploy the crane, lock it in place at maximum boom elevation, and hoist a spectra stay that has a headblock for the halyard and the sail hanked on to the stay. The stay is tensioned by the crane hoist wire.

When making port, the sail is lowered and stuffed into a stowage area at the foot of the cargo crane, the stay is dropped in the same location, and the crane is ready for cargo work. There is no rigging that interferes with cargo operations. All the rigging is spectra and can be handled by humans without danger of injury or rigging failure from kinking, etc.

I estimate that three good big boat sailors can rig, set, and douse the sails. Once the sails are set, they will stand sail watch (trimming and route optimization) while the vessel is underway. In other words, if this were a prototype vessel, I would provide three additional specialist crew members to the crew and not overburden the standard crew with this technology.

This vessel is fitted with 35-ton cranes. At 25 mph wind speed, each sail will generate about 2.5 tons wind pressure.

Let’s, for the time being, assume that sail area will be reduced when wind speeds exceed 25 mph, but I think the system can probably sustain higher wind speeds, especially from abaft.

Headstay tensions are much higher than wind pressure, but, depending on the headstay sag, they are unlikely to exceed 35 tons. There is a side load component on the crane boom and cranes booms do not like to be side loaded, but side loads are an order of magnitude less than the crane capacity. I expect that some calculations and possible modifications (locking features) need to be made on the cranes for this unorthodox use, but I don’t think these modifications will be a deal breaker.

In good conditions these sails will generate about 10 tons of thrust. That is nice, but far from the 70 tons or so thrust that is generated by the 6,700 hp main engine to drive the vessel at 13 knots.

I estimate that, overall, this arrangement will save about 10 to 15% in fuel consumed at 13 knots (if the wind is blowing). That is fuel not burned and therefore a good deal from an environmental point of view, but is it worth it?

Keep in mind that in a 25-mph wind from a useful direction this vessel can probably do about 7 knots under sail alone (1/2 the speed requires 1/8 the thrust). If the wind is truly from an attractive direction (reach to tight reach), things become even more interesting because motor sailing can add significant speed at very low additional fuel costs, since it increases apparent wind speed with various interesting beneficial effects. While at this stage I have no way to quantify it, I also know that sails can reduce drag from waves due to their steadying effect and that may provide additional performance gains. (As a side note, I also looked at energy production by covering the hatch covers with thin film solar, but that only results in an additional 64 kW round the clock on average and is not going to make a significant difference.)

All of this would heavily depend on advanced weather routing and deployment on attractive routes.

I estimate that the four sails (at about $10 per square foot resulting in $140,000), rigging, the 12 winches, and the various crane and stowage modifications will cost $1M to $2M to procure and install (which would be a payback period of 5 years or so at zero interest, and the life of these components probably equates to about 5 years). Then there is also the cost of the additional crew.

Let’s discuss the cost of the additional crew. Three additional crew members, especially if they are skilled big boat sailors, would probably be more expensive than $400 per crew member per day, but it is in the ballpark. Nevertheless, together with the equipment investment, commercially, it becomes a losing proposition.

However, I still think it may be worth it to modify a bulker to carry a sail arrangement like this.

What if the sailing crew is paid according to fuel saved? In other words, their pay depends on how much less the vessel burned if it had operated on the engine alone. If we were to use this example, that would be on the order of $300 per day per crew member (no savings while in port, or in low or adverse wind). While it would not be terribly attractive by itself, together with base pay it could be the basis for a trial arrangement.
And I think it would be a very worthwhile trial for the following reasons:

To quote a famous philosopher (Master Yoda), Do or do not; there is no try.

For each column I write, MREN has agreed to make a small donation to an organization of my choice. For this column I nominate Fair Haven River Rats, a small-town sailing program founded with an initial waterfront donation from shipping scion Walter Isbrandtsen. This program has been running since 1955 teaching thousands of kids to sail by keeping things simple.