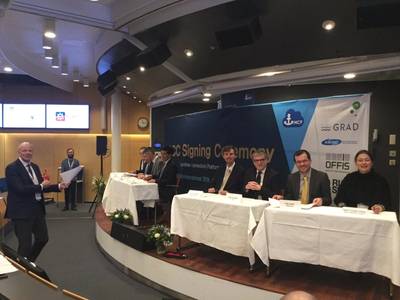 On February 8, 2019, the Maritime Connectivity Platform Consortium (MCC) was established with a signature ceremony during the conference ‘e-navigation underway international 2019’.

The MCP, has been evolving for a number of years. Around 2015, the development escalated significantly, when three large projects collaborated on the common use and further development of the technology. These were the EU projects ‘EfficienSea2’ and ‘STM Validation project’ and ‘SMART Navigation project’ funded by the Korean government. During these projects an MCP testbed was established, which now has been running for several years, and nearly 100 organisations have signed up to the platform.

The MCP itself initially addresses the goals of the e-navigation initiative of IMO, but the ambition is for the MCP to support digitalization in the Maritime domain at large.

It relies on the Internet concept of Web Services and with special services for identity management and service management supporting the IMO concept of Maritime Services.

The MCP supports actors to use digital services to exchange public as well as private information. Potential commercial and non-commercial institutions can become provider of the MCP using their own installations of the MCP.

For this, the MCC is established as neutral and independent consortium of interested parties. It will act as the coordinator for the provision of guidelines and standards. The MCC adopts the open structure of the World Wide Web Consortium (W3C) and interested parties are encouraged to join these initiatives and bring in their visions and competencies.

General Lighthouse Authorities of UK and Ireland. The Danish Maritime Authority (DMA), Swedish Maritime Administration (SMA) and the Ministry of Ocean and Fisheries of the Republic of Korea (MOF) are joining as Governmental Observers.