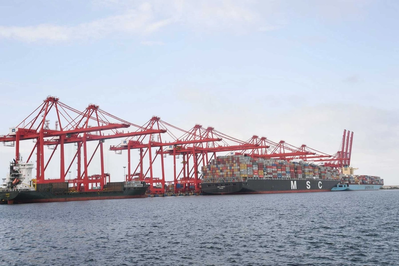 Sri Lankan customs officers on Tuesday called off a strike that left 6,000 containers stranded at the country's main port and put pressure on food prices, after the government agreed to reinstate their boss for three months.

The strike by thousands of officials began a week ago in protest at the sacking of Director General P.S.M. Charles, who authorities blamed for a drop in customs revenue last year.

It was not immediately clear how long the backlog of containers would take to clear after unions said late on Tuesday that the strike had ended.

About 1,000 of the containers hold perishables such as onions and potatoes and any price increases would be passed to consumers, Hemaka Fernando, spokesman for the Essential Food Commodities Importers and Traders Association, said earlier.

The strike has cost the government nearly 20 billion rupees ($113 million) in lost revenue, finance ministry officials said, and any spike in food prices would be likely to accelerate inflation which has held below 5 percent since September.

Unions have blamed the drop on a political crisis that was triggered in October when President Maithripala Sirisena removed Prime Minister Ranil Wickremesinghe and dissolved parliament. Wickremesinghe returned as premier weeks later but the relationship between the two men remains tense.