KOTUG Winner of the King Willem I Award 2014 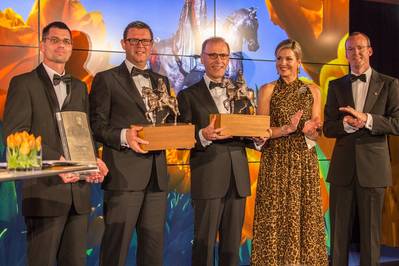 KOTUG International B.V. was proclaimed the winner of the King Willem I Award 2014 in the category ‘medium and small sized enterprise’. The award was presented by Her Royal Highness Queen Maxima of The Netherlands to Ard-Jan Kooren at the Dutch Bank.

King Willem I Award
The King Willem I Award is granted every two years by the King Willem I Foundation. The Foundation’s mission is to provide new impetus to the national economy, thereby promoting the standing of Dutch trade and industry. The criteria used by the jury in their selection are daring, decisiveness, perseverance, sustainability and innovation.

Jury report for KOTUG International
KOTUG is imbued with the Rotterdam decisiveness and takes its leading position based on technical innovation that exists within the company. The board of the King Willem I Foundation expressed special appreciation to KOTUG for the way in which ‘Dutch glory 2.0’ is realized.