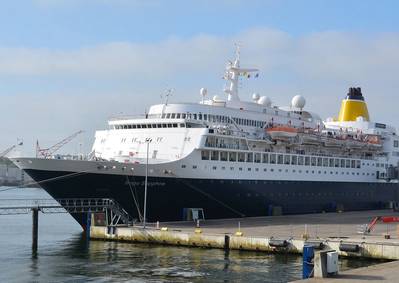 The first of four visits to Kiel this season by the British shipping company Saga Cruises began early Thursday with the arrival on the Kiel Fiord of the Saga Sapphire with 640 English-speaking passengers on board.

The flagship of the Saga fleet was met by a local tug near the Friedrichsort Beacon and within sight of the entrance to the Kiel Canal. To the accompaniment of a water fountain display by the tug, the ship was escorted to her berth at the Ostseekai Cruise Shipping Terminal. During the course of a reception later on the ship, port head Dr. Dirk Claus presented Captain Julian Burgess with the traditional commemorative plaque awarded by the Schleswig-Holstein federal state capital Kiel to ships visiting the port for the first time. Claus, who is the Managing Director of the Port of Kiel (SEEHAFEN KIEL GmbH & Co. KG), said, “Saga Cruises is one of those shipping companies which have discovered Kiel for themselves as a gateway for land excursions in north Germany and which, with increasing regularity, now include the port in their route planning.”

During their stay in Kiel, the passengers of Saga Sapphire had an opportunity to undertake a wide variety of land excursions. On offer are trips ranging from city tours in both Kiel and the Hanse city of Lübeck and scenic excursions to Holstein Switzerland – a local region of hills and lakes - to visits to the seaside spa resort of Laboe. Other excursions take visitors as far as the city of Hamburg.

Kiel expects a total of 22 visits during this season as part of ongoing cruises. Day stays in Kiel are an integral part of route planning at the shipping companies Cunard Line, Fred. Olsen Cruise Lines, Holland-America-Line, MSC Crociere, Ponant, Pullmantur, P&O Cruises, Saga Cruises and Viking Ocean Lines. Because the Ostseekai Terminal is very close to the City Center, passengers also have an opportunity to explore Kiel on their own. The passengers on Saga Sapphire were able to enjoy Kiel in the evening as well, because their ship was remaining berthed overnight at the Ostseekai.

The 37,049 GT Saga Sapphire, which is 200 m long, is on a ten-day Scandinavia Cities cruise which began on May 10 in Dover. After visits to Oslo, Copenhagen and Aarhus, Kiel was the last stop on her trip, which ends back in Dover on Sunday, May 20.

The ship called at Kiel for the first time with the name Saga Sapphire but is in fact a well-known visitor to the Kiel Fiord under another name. She was built at the Bremer Vulkan Shipyard in 1981 as Europa and was the fifth ship of that name for Hapag-Lloyd Cruises. During her time with that operator the Europa called at least once almost every year at Kiel’s Bollhörnkai. Her last visit was on June 19, 1999. After that she sailed with Star Cruises, Pullmantur (2004) and Crocieres de France (2007) before going into service with Saga Cruises in 2012.

“The visit of “aga Sapphire is at one and the same time a maiden call and a reunion,” Claus said. “In the meantime Kiel has consistently invested in the cruise shipping sector. This year we start construction of another terminal handling facility.”