Boys are coaxed into cleanliness at bath time playing with boats. But it was never a game for Joseph Farrell, III, instinctively realizing he was ballasting and salvaging ships, unlike the typical Mr. Bubbles kid. The scion of Resolve Marine Group may have been born to lead the global emergency response company founded by his father with a single tug 38 years ago, but he’s never taken dangerous wreck removal lightly.

Before turning 15, Joey had two close calls on and around ships that guide him today, at 34. Realizing one should always study what is seemingly intuitive, he applies proven, problem solving techniques when exploring submerged vessels and new business opportunities.

“When I was really young, around four or five years old, I fell through the deck of a barge, and got cut up,” said Joey Farrell. “Then when I was 13 or 14, a ship was aground off Jamaica. There was sugar in the water and it was murky. During the dive inspection, I got sucked underneath the ship. It happened so quickly, afterwards I freaked out a little. After that, whenever I would dive around a wreck, I would feel around the corner to see if there is suction.”

Growing up, Farrell heard stories of near misses, realizing salvage is serious business.

“It reaffirms what you knew and to minimize the risk in each scenario,” he said. “As intuitive as it is, look into it. Resolve has an emphasis on personal safety and all staff have an operational background.”

Naval architecture and engineering is integrated into daily operations for emergency response and wreck removal. There is an engineer on each team to assist in stabilizing every situation and avoid mistakes.

“Wreck removal is reverse engineering, deconstructing a ship,” said Todd Schauer, director of operations for Resolve Marine Group. “Joey led the team that designed the system for the patented heave-compensated chain puller lift system on DB1, the heaviest salvage lift in the Americas.”

How do you run a business based on disasters? The difference between salvaging a vessel and the team blowing up can be 15 minutes. There is no wreck without an emergency; if Resolve doesn’t respond within four hours of an emergency or fire, the mission becomes wreck removal or a salvage.

Surprisingly, the now huge, family-owned company does not reek of nepotism.

Joey Farrell is humble, calm and direct, with a dry sense of humor. He’s the kind of guy to buy you a beer - or brew it for you, himself - at his own microbrewery, LauderAle, which offers 36 beers on tap. Located just outside Port Everglades in Fort Lauderdale, Fla., LauderAle is a great decompression spot for off-the-clock staff after a long day of emergencies.

“Joey is not sitting in an ivory tower, he is on the job” said Schauer.

Although his last name is not Farrell, Schauer prefers Resolve is privately owned, as the family has continuously reinvested in the company, propelling it forward, as other salvage companies merged or folded during his career.

“Resolve didn’t have a single shackle in the Gulf of Mexico after Katrina,” said Schauer. “Now we have a big facility and a fleet.”

The ebb and flow of salvage business doesn’t work as well in a public or pure corporation with shareholders expecting quarterly dividends, people who don’t understand risk, according to Schauer.

“We live and die by our projects,” he said. “The carrots of big reward carry big liability.”

With a diverse field staff including female divers, the company renowned for cleaning up the biggest messes in the world still chases every wreck removal, providing emergency response during disasters from the Value Jet crash to contracting with USCG for cleanup after Hurricane Harvey. 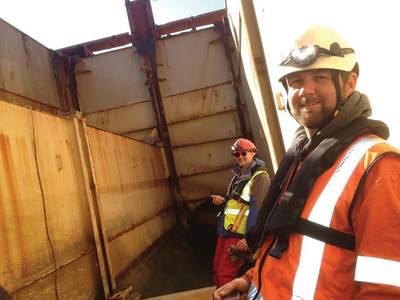 Environmental compliance: The Fnal Frontier
Integrated business units help support projects with a stable business model, like Resolve Marine Academy, which has trained nearly 50,000 crew in disaster response, including employees of Royal Caribbean and Shell. Remarketing salvage is now a company mantra, as salvage operations previously protected cargo. Now, salvage is dedicated to protecting the environment. With oil spill response for all ports in China and developing countries, Resolve supports readiness for OPA 90. The business has changed since the days of ballasting fuel tanks, washing cargo and pumping the residual overboard.

“Any island country with tourism doesn’t want to see a drop of oil,” said Farrell, adding “Shipping is getting safer all the time. OPA proved we can reduce accidents significantly by creating a standard. We take the place of the responder and charge to keep standards, understanding requirements because we are ready 24/7.”

Behind the scenes at the last salvage company run by salvors, father and son don’t always work together very closely. About 10 years ago, when Joey came aboard, his father started passing the baton.

“We have our differences, but it’s as good as it gets,” said Joey. “We don’t have arguments, we talk it through.”

Farrell graduated from Cornell University with an MBA and a masters in ocean engineering from Florida Institute of Oceanography. He received his license as 3rd assistant marine engineer, unlimited tonnage, and chief engineer 4000HP, from Massachusetts Maritime Academy. While he worked during summers at Resolve, Farrell’s first job was as a lifeguard. He considered a career as a helicopter pilot, although now just flies for fun whenever he can. He enjoys developing programs for web applications, playing guitar, fishing, reading and investing. Hard work, a lot of hours, and thought into every decision energize Farrell’s daily life. His turn-on is fixing problems, which bodes well leading a company that protects life, the environment and property at sea. “I like the methodology of a well-oiled machine,” said Farrell. “I like productivity, stuff getting done - quicker, faster, cheaper, better - and going through the numbers to find a solution and data. I don’t care for negativity or problems without proposed solutions.”

His secret to success? He’s not sure, but is grateful to increase scalability with the same ethics his father taught him. “Do I have success yet?” quipped Farrell. “I don’t know. My goal is just to not screw this up.”