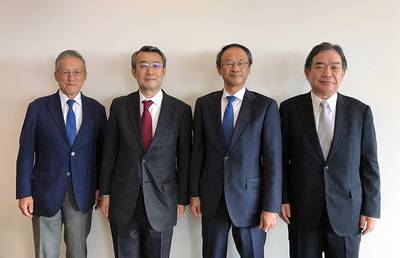 Mitsubishi Shipbuilding Participating in "Planning and Design Center for Greener Ships" focussed on R&D toward Achieving Decarbonized Shipping, and on December 10, 2020, a presentation was held in Yokohama to announce the establishment of the Center.

Mitsubishi Shipbuilding Co., Ltd. has become a member of "Planning and Design Center for Greener Ships," a core organization established to plan and propose state-of-the-art ships on a continuing basis through integration of the accumulated expertise of Japan's shipbuilding industry.

Together with other members of domestic shipbuilders, Mitsubishi Shipbuilding will pursue development of advanced environmental performance-enhancing technologies for the era of carbon neutrality, targeting near-zero carbon emissions, and engage in activities focusing on research and development related to commercialization of next-generation greener ships.

The founding aim of the Planning and Design Center for Greener Ships is to contribute to the growth of Japan's shipbuilding industry by developing advanced environmental performance-enhancing technologies that will respond to tightening of environmental regulations over the long term through consolidation of the country's technologies in ship design, and by advancing commercialization of next-generation greener ships.

In total of nine domestic shipbuilders, including Mitsubishi Shipbuilding, together with Nippon Kaiji Kyokai (ClassNK), have already joined or announced intent to join the Center. In addition, participation will be sought among domestic companies involved in marine business, shipping companies, trading houses and other entities supporting the center's aims.

Initially, the center, representing Japan's shipbuilding industry, will strive to prepare a detailed proposal on next-generation ships that will reduce greenhouse gas (GHG) emissions, in a quest to achieve the medium to long-range targets of the IMO.