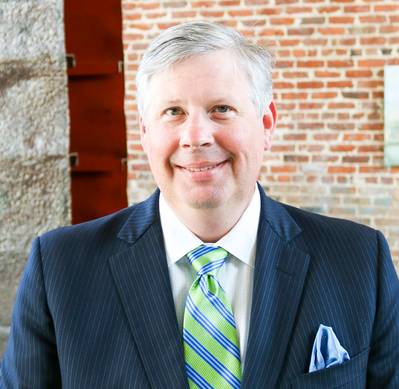 What is the value proposition to the ship owner of the midstream cargo ops?
A major benefit of midstream cargo handling is that multiple cranes can load/unload from both sides of the vessel.   Basically, this type of operation allows for non-stop operations, other than some minor service and crew changes.

Unlike typical dock operations with fixed assets, a major mechanical failure does not have a significant impact to the vessel owner or shipper as the asset can easily be replaced with another asset.   If storage of bulk cargoes is not necessary in the lower Mississippi River, another benefit is the cost of direct discharge to barges that are ultimately transiting inland.  A typical bulk transfer to/from storage is 2.5 to 3 times the cost of handling via floating crane directly to or from barge.  Floating cranes also offer the flexibility to shippers and vessel owners to capture advantages related to barge freight savings at certain locations and ocean vessel savings in pilotage and sailing time.

As a point of reference, can you give details/a case study of how the operation specifically works?
A typical midstream cargo handling starts when a vessel arrives at a berthing system consisting typically of 3 bow buoys and 2 stern buoys.  The vessel will drop its anchors and utilize its mooring lines “hooked” to the buoys for extra stability.  Once the vessel is all fast, Associated Terminals can deploy the floating cranes to each side of the vessel to start discharge.  As the cargo is being handled, a production manager is coordinating the barge switches and cargo hold discharge/loading.  With vessels having homogenous cargo, the production manager can ensure maximum discharge/ load efficiency by having the cranes winch up and down the sides of the vessel to discharge full cargo holds while other holds are being hand trimmed or machine cleaned with loaders and excavators.

I noted some fairly sophisticated cranes working when we took our took. Can you provide specifics on those units?
Associated Terminals has 14 Gottwald cranes ranging from 110,000 lb. duty cycle lifting capacity to 120,000 lb. duty cycle lifting capacity.  Five of the 14 cranes have boom length of approximately 169 feet with a capability of utilizing an 18 to 26 cubic yard bucket on dense cargoes up to an 85 cubic yard bucket on lighter material.  The balance of the cranes can handle an 18 to 22 cubic yard bucket for dense cargoes to a 68 cubic yard bucket for light material.  Each crane is capable of handling 1,250 tons of cargo per hour in duty cycle operation.  Associated has also developed a custom written telematics system that monitors around 3,000 parameters for operational performance and overall system health.  Details such as bucket performance, digging efficiency, and delay periods are accessible to our operations team.  Crane alarms ranging in severity from the low windshield wiper fluid up to engine fire alarms are recorded and immediately transmitted to a central server.   The system automatically notifies the responsible maintenance personnel based on priority and emergency rules.  The result is higher operational efficiency with lower downtime. 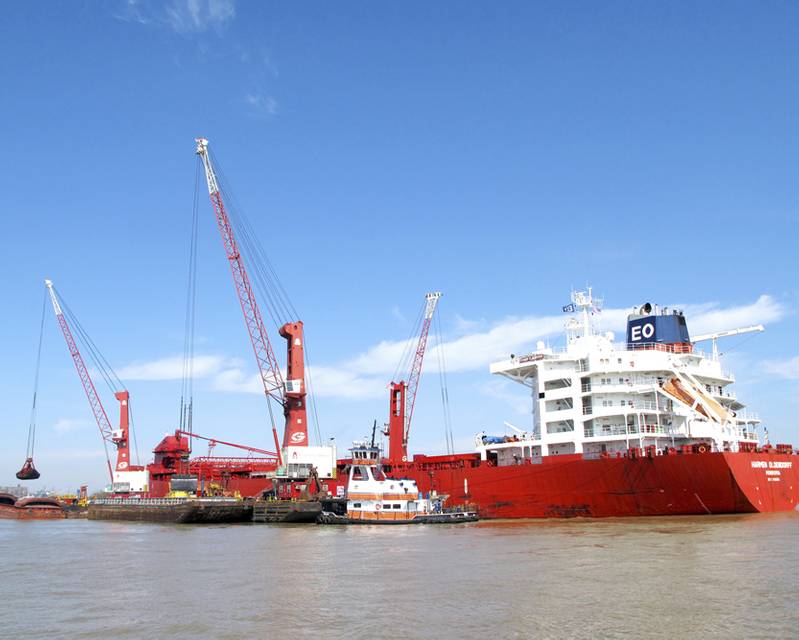 Mid-Stream cargo operations require a number of logistics challenges, but heavy lift capacity lies at the heart of the operation. Associated Terminals has 14 Gottwald cranes ranging from 110,000 lb. duty cycle lifting capacity to 120,000 lb. duty cycle lifting capacity. (Photo: Associated Terminals)The Mississippi River system has been at a historic water level for more than six months. How, specifically, has this impacted Associated’s business in the region? (Editor’s Note: This interview was conducted before the New Orleans area was hit by hurricane Barry).
Associated Terminals’ business has been impacted in many ways relative to high river.  Due to daylight vessel berthing restrictions placed during such high river events, Associated Terminals finds itself in a position of having cranes available to work, but no vessel in berth to handle.   Many times, Associated will lose 12 to 20 hours in such events waiting for the vessel that just completed to sail at daylight and another several hours for the next vessel to arrive depending on where the vessel is anchored.  Having the amount of berths Associated has can minimize the effects of to the shipper and vessel owner, but loss of time making these vessel swaps does occur.    Another benefit of midstream operations and floating cranes is the ability to move cranes throughout the harbor to increase discharge and load rates at various locations along the river system.

However, when the river is at such a level as it has been, the floating cranes have an air draft that prevents them from transiting under some of the bridges in the harbor.  This eliminates the company’s ability to maximize it’s efficiency and flexibility to handle vessels in a more timely manner.

Barge switching will also take a huge effect on the cranes efficiencies as well during periods of high water.  During normal river conditions and even a little high water event, barges switches take minimal or little effect on the company’s ability to ensure the cranes are always swinging cargo.  Just in 2019 alone, Associated has experienced approximately 9800 crane hours of standby waiting for barge switches.   All of these high river factors have basically equated to a very conservative estimate of 2.5 million tons in lost capacity and in excess of $14 million dollars in vessel demurrage and lost production expenses.

What do you consider the biggest challenge to your business today (outside of the high waters)?
Our greatest challenge to our business today is finding ample personnel to fulfill positions available on the Mississippi River.  With an ageing workforce across this country, many companies and facilities are having a difficult time finding sufficient and qualified personnel.  Although our industry is vital to this region, it still remains very unknown and a mystery to the average person in South Louisiana. Associated is challenged with making the future workforce aware of our industry and the well compensated career opportunities that are available.

Meet Todd Fuller
Todd Fuller is President of Associated Terminals. The company provides maritime services including stevedoring, logistics, terminal and port operations. He joined the company in 1998 as a logistics coordinator and rose through positions of increasing responsibility. He has also served as vice president and senior vice president of the company. Todd graduated from Louisiana State University with a Bachelor of Science in Marketing.  He is a board member of the Big River Coalition, the World Trade Center of New Orleans, The Next 25 and is a supporter of New Heights Therapy Center, a therapeutic equestrian organization.