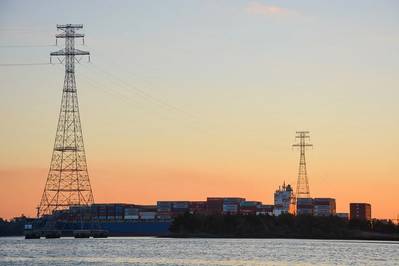 A new air draft over the Cape Fear River will make it easier for ultra-large container vessels to reach the Port of Wilmington.

The new allowable air draft has been increased to 212 feet. The air draft clearance will allow ships with a carrying capacity of 14,000 TEUs (twenty-foot-equivalent unit) and greater to safely and efficiently navigate to Wilmington.

The four-month, multi-million-dollar project led by Duke Energy consisted of upgrades to the transmission towers in the Cape Fear River and the replacement of existing lines. Altogether, the improvements raised the transmission lines a total of 41 feet.

The completion of this project comes as North Carolina Ports continues to push forward with its more than $200 million capital improvements plan. Infrastructure improvements include a wider turning basin, berth enhancements and an overhaul of Wilmington’s container terminal. The terminal renovations will double the port’s annual throughput capacity to 1.2 million TEUs and triple its refrigerated container capacity to 1,000 plugs.