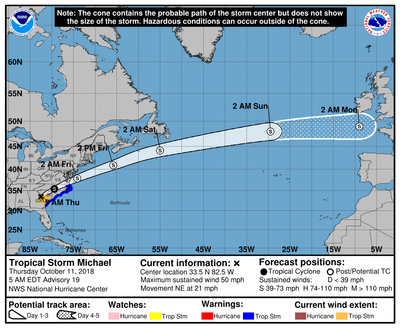 Hurricane Michael, the third most powerful storm ever to strike the U.S. mainland, headed northeast on Thursday, weakened but still set to soak Georgia and the Carolinas after devastating the Florida Panhandle.

The Category 4 hurricane was the fiercest to hit Florida in 80 years when it came ashore on Wednesday, but its strength waned as it pushed into Georgia. Early on Thursday, it was downgraded to a tropical storm, with top sustained winds diminishing to 60 miles per hour.

More than 700,000 homes and businesses were without power in Florida, Alabama and Georgia early Thursday. Thousands hunkered down in shelters overnight after fleeing their homes to escape the fast-approaching storm.

Michael rapidly intensified as it churned north over the Gulf of Mexico and caught many by surprise. The storm made landfall on Wednesday afternoon near Mexico Beach, about 20 miles (32 km) southeast of Panama City.

The governors of North and South Carolina urged residents to brace for heavy rain and storm-force winds as Michael plowed northward up the Atlantic seaboard. The Carolinas are still recovering from Hurricane Florence less than a month ago.

The National Hurricane Center (NHC) said Michael would dump as much as 8 inches of rain in some areas. Up to a foot (30 cm) of rain was forecast in Florida.

Television news footage showed homes submerged in floodwaters up to their roofs in Mexico Beach. The fate of about 280 residents who authorities said ignored evacuation orders was unknown. Numerous buildings in Panama City were demolished or left without roofs amid deserted streets littered with debris, twisted, fallen tree trunks and dangling wires.

"There are so many downed power lines and trees that it's almost impossible to get through the city," Apalachicola Mayor Van Johnson said.

Some 500,000 Florida residents had been ordered or urged to seek higher ground before the storm in 20 counties spanning a 200-mile stretch of shoreline, the Federal Emergency Management Agency (FEMA) said.

As many as 320,000 people on Florida's Gulf Coast had disregarded evacuation notices, according to Brad Kieserman of the American Red Cross.

An estimated 6,000 people evacuated to emergency shelters, mostly in Florida, and that number was expected to swell to 20,000 across five states by week's end, Kieserman said.

Bo Patterson, the mayor of Port St. Joe, just south of Mexico Beach, rode out the storm in his house seven blocks from the beach, describing the scene outside as "very, very scary."

In all, about 2,500 of the town's 3,500 residents stayed put, with many caught off guard by the storm's rapid escalation. "This happened so quickly," he said.

FEMA head Brock Long acknowledged that evacuation efforts in the area were slow compared with how fast the hurricane intensified. Michael grew from a tropical storm into a Category 4 hurricane in about 40 hours.

With a low barometric pressure recorded at 919 millibars, the measure of a hurricane's force, Michael ranked as the third strongest storm on record to make landfall in the continental United States. Only Hurricane Camille on the Mississippi Gulf Coast in 1969 and the so-called Labor Day hurricane of 1935 in the Florida Keys were more intense.

U.S. President Donald Trump declared a state of emergency for all of Florida, freeing federal assistance to supplement state and local disaster responses.

The Pentagon positioned more than 2,200 active-duty military personnel, along with helicopters, high-water vehicles and swift-water boats.

Even before landfall, the hurricane disrupted energy operations in the Gulf, cutting crude oil production by more than 40 percent and natural gas output by nearly one-third as offshore platforms were evacuated before the storm hit.

Port Condition X-ray means the tropical storm force winds are anticipated within 48 hours. These ports and facilities are currently open to all commercial traffic and all transfer operations may continue while X-ray remains in effect.

All ocean-going commercial vessels and ocean-going barges greater than 500 gross tons should make plans for departing ports in the Hampton Roads COTP zone. Vessels desiring to remain in port must immediately contact the COTP to receive permission and are required to submit a safe mooring plan in writing.