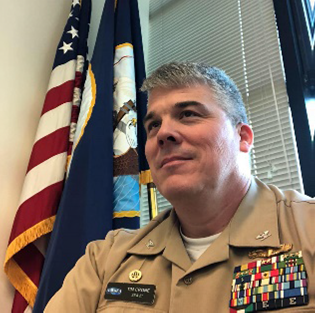 CAPT Crone, a graduate of the United States Naval Academy, earned his Bachelor of Science degree in Political Science from the US Naval Academy and completed a Master of Science in Justice, Law and Society from American University. He has also received a Master of Arts in National Security Policy and Strategic Studies from the U.S. Naval War College.

CAPT  Crone served as the Commanding Officer on USS PONCE (LPD 15) through two major overseas deployments. During his tenure in command, he served as Maritime Interdiction Operations Commander for the deployed battle group, skillfully coordinating multi-ship anti-piracy interdiction efforts, resulting in sustained safe passage for international commerce in the Red Sea and Gulf of Aden.

Starting in December 2010, CAPT Crone joined the Surface Warfare Officer Acquisition Corps, and worked at the Washington Navy Yard in DC, working in a variety of positions including Technical Director in the Anti-Terrorism Program Office (PMS 480), Principal Assistant Program Manager in the Mine Warfare Program Office (PMS 495), and Major Program Manager in multiple programs (PMS 470 and 443). As the Major Program Manager for PMS 443, he established the Surface Ship Readiness and Sustainment Program Office in 2015, charged with Fleet introduction and management of the life cycle and sustainment of all non-nuclear Navy surface ships. This new office resulted in centralized support and unified policies for the sustainment and life cycle engineering of all surface ships in the Navy. The new office pioneered new processes to improve the timely completion of technical reviews and logistics support for every ship alteration within the portfolio, resulting in significant improvements in operational availability and a reduction in lost operational days across the fleet.

His awards include the Navy and Marine Corps Medal, for his leadership on September 16, 2013 for calmly alerting and directing coworkers out of the building while a lone shooter entered the NAVSEA headquarters.