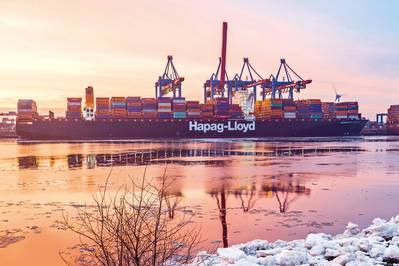 Hapag-Lloyd completed the planned capital increase of EUR 370 million (approximately $452.5 million) as part of the business combination with the Chilean shipping company Compañía Sud Americana de Vapores (CSAV). As planned, CSAV subscribed to EUR 259 million (approximately $316.8 million) and Kühne Maritime made a cash contribution of EUR 111 million (approximately $135.8 million). The capital increase had already been agreed upon mid-April with the signing of the contracts to combine CSAV’s container business with Hapag-Lloyd. It was to be implemented by the end of 2014.
After the capital increase, the shareholders of Hapag-Lloyd AG hold the following stakes: CSAV with 34%, HGV (City of Hamburg) 23.2%, Kühne Maritime 20.8%, TUI 13.9%, Signal Iduna 3.3%, HSH Nordbank 1.8%, M.M.Warburg & CO 1.8% (including two private investors) and HanseMerkur 1.1%. CSAV, HGV and Kühne Maritime have agreed to pool 51% of the shares in Hapag-Lloyd in order to discuss and make key decisions together in the future.
Beside the Closing on December 2, the capital increase was a requirement for releasing the bond with a volume of EUR 250 million (approximately $305.9 million) that had already been placed successfully on November 20. The proceeds from the bond with a maturity of five years will be used for the early redemption of the Hapag-Lloyd Euro bond due in October 2015. The redemption will take place on December 23.
• Hapag-Lloyd AG • HSH Nordbank