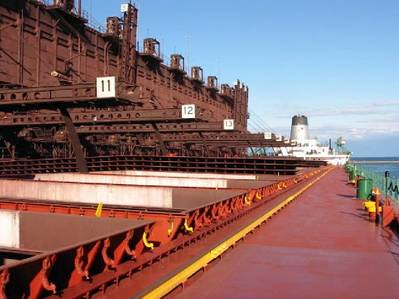 Shipments of iron ore on the Great Lakes totaled 5.8 million tons in October, an increase of 5.7 percent compared to a year ago, the Lake Carriers' Association reported. Shipments also outpaced the month’s 5-year average by nearly 9 percent,

Year-to-date the iron ore trade stands at 44.7 million tons, a decrease of 1.8 percent compared to the same point in 2017. The shortfall has been decreasing over the course of the shipping season. At the end of April, iron ore shipments were down nearly 14 percent.

Through October iron ore loadings are 7.2 percent ahead of their 5-year average for the January-October timeframe.