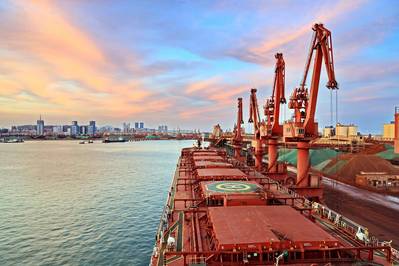 Shipping group Golden Ocean warned on Tuesday its profit would be hit by a slowdown in demand due to the coronavirus outbreak in China, sending its shares down more than 3% in early trade.

The world's second-biggest economy has seen business activity curtailed in recent weeks as it battles to combat the spread of the virus, pushing down shipping rates for commodities such as coal and iron ore used in Chinese factories.

"The market is currently presenting a challenging scenario that will impact our results in the near term," Ola Lorentzon, Golden Ocean's chairman and interim chief executive, said.

Controlled by Norwegian-born billionaire John Fredriksen, Golden Ocean specializes in dry bulk commodities such as coal or iron ore and operates most of its fleet - 66 out of 79 vessels - in the spot market or on similar short-term contracts, thus quickly feeling the impact from any ups or downs in the market.

The Oslo- and New York-listed firm said, "It is too early to forecast the potential impact of the coronavirus beyond the short term and information being released from China does not provide a complete view of its current impact."

On Monday, the Chinese central bank cut the interest rate on its medium-term lending and the country has also announced plans to cut taxes and fees to help soften the impact on the economy.

However, Golden Ocean said normal business operations were unlikely to quickly resume. "As a result, commodity-related supply chains may become disrupted, with some taking longer than others to return to normal."

In case of persistent market weakness, the shipping industry is likely to increase the scrapping of older, less fuel-efficient, vessels as a way to rebalance the market, it added.

In the final three months of 2019, Golden Ocean earned a net profit of $41 million, up 74% year on year and beating an average forecast of $37 million in a Refinitiv poll of analysts.

The company cut its fourth-quarter dividend to $0.05 per share from $0.15 in the third quarter, missing an average analyst forecast of $0.14.

"As the current market dynamic continues to unfold, our focus remains on maintaining efficient operations and a strong balance sheet and liquidity position," Lorentzon said.

Golden Ocean's Oslo-listed shares traded 3.2% lower at 0858 GMT, underperforming a 0.4% drop in the Oslo benchmark index. The company's shares have fallen by 20% year-to-date.