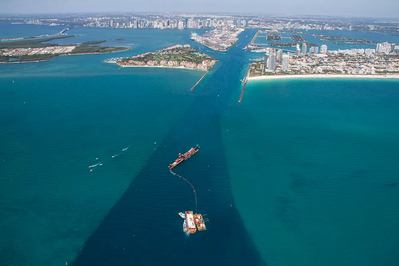 Great Lakes Dredge & Dock Corporation (Nasdaq:GLDD), a provider of dredging services in the United States, has reported financial results for the quarter ended June 30, 2019. The company weighs in as follows:

“Earlier this year Great Lakes announced that it would initiate a process to divest the E&I business from its portfolio given that it was no longer a strategic fit with our core business.  We completed the sale in the second quarter of this year and believe the business and affected team members will be a strategic fit with the new owner and the transaction will better position the E&I business to be successful in the future.

“Also in the second quarter we executed an amendment to our revolving credit facility.  Due to the significant improvement in the company’s credit profile and cash position, we were able to reduce the size of the facility to $200 million, extend the term five years, improve both the upfront pricing and interest rates, and gain much more flexibility to execute on the company’s strategy over the next five years.   We are very pleased with this facility.  As of June 30, 2019 we continued to have no cash drawn on the revolving credit facility.

“As expected, the second quarter bid market, much like the first, was below the prior year with only $235.1 million awarded in the total market, of which Great Lakes was awarded $77.6 million. However, we expect bidding to increase significantly in the third and fourth quarters, with several bid dates for a variety of projects already advertised for August and September.”

Quarterly Results
•Revenue was $184.8 million, an increase of $49.5 million over the second quarter of 2018. The second quarter of 2019 was characterized by strong production and project performance. Revenues in all markets increased quarter over quarter with the exception of capital projects.
•Gross margin percentage improved to 20.3% in the current quarter from 16.4% in the second quarter of 2018 on strong project performance, particularly on port deepening projects.
•Operating income was $22.8 million which is an $11.8 million increase over the prior year quarter. The increase is a result of higher gross margin slightly offset by increased general and administrative expenses due to incentive compensation.
•Net income from continuing operations for the quarter was $11.5 million compared to net income from continuing operations of $1.2 million in the prior year quarter. In addition to the increase in operating income, net interest expense in the second quarter of 2019 also decreased compared to the prior year quarter by $1.8 million on lower revolver usage and higher interest income.
•At June 30, 2019, the Company had $125.6 million in cash and total debt of $322.4 million, resulting in a ratio of net debt to adjusted EBITDA from continuing operations of 1.41x.
•At June 30, 2019, the company had $498.1 million in backlog, a decrease of $209.0 million from December 31, 2018. This decrease was expected as the company earned significant revenue during the first half of 2019 and bidding activity was low.
•Capital expenditures for the quarter were $19.2 million. This compares to $5.8 million in capital expenditures during the second quarter of 2018. Current quarter capital expenditures included final payment of $10.0 million for the new clamshell dredge.  The company continues to expect total capital expenditures to be $40 million for 2019.

Market Update
We continue to expect additional phases of multiple large deepening and other capital projects to bid in the second half of the year resulting in another strong domestic bid market in 2019. The projects coming into the pipeline include additional phases of work in Savannah and Corpus Christi, new projects in the Ports of Norfolk, Virginia and Freeport, Texas and large coastal restoration projects in Mississippi and Louisiana.  In addition to this anticipated capital work, we also expect to bid on multiple projects funded by the $17.4 billion disaster supplemental appropriations. While most of this funding is for non-dredging projects like flood control, there is a significant portion that is intended to be deployed in our sector to recover from the damage caused by coastal storms and to reduce the risk of future damage from flood and storm events. Although we have not yet bid on these projects, we do expect the projects to come into the market in the second half of the year.

In addition to the deepening and coastal protection projects, several Liquefied Natural Gas petrochemical and crude oil projects are creating the need for port development in support of energy exports. We believe several of these private client projects are progressing to bid in 2019.  Great Lakes’ fleet and safety performance position the company well to perform in this growing segment of the market.

The company will be holding a conference call at 9:00 a.m. C.D.T. today where we will further discuss these results. Information on this conference call can be found below.