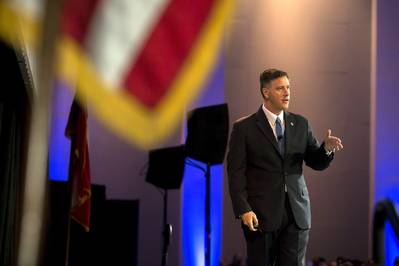 The Georgia Port Authority (GPA) has unveiled a $2.5 billion plan to expand the capacity at the Port of Savannah to 8 million TEUs by 2028.

“We’re preparing to redefine the Port of Savannah as not simply the load center for the Southeastern U.S., but as the port of choice for major inland markets east of the Mississippi River,” Lynch said.

During his presentation to nearly 1,400 people, including Gov. Deal, Georgia House Speaker David Ralston, Congressman Buddy Carter, other elected officials and business leaders from across the state and nation, Lynch detailed projects that include the Mason Mega Rail facility, which will double the Port of Savannah’s rail capacity to 1 million lifts per year by 2020; new equipment purchases including eight additional ship-to-shore cranes and 64 additional rubber-tired gantry cranes; gate and container storage expansions, berth improvements and off terminal road additions.

“Almost eight years ago, Gov. Nathan Deal established a goal to make Georgia the best state in the nation to do business by providing state government, business leaders and our ports what they needed to make that happen,” said GPA Board Chairman Jimmy Allgood.

He noted that since Governor Deal took office in 2011, the Port of Savannah has grown by 45 percent or an additional 1.2 million TEUs; the harbor deepening project has been approved and is now 50 percent complete; and, state transportation improvements like the Jimmy Deloach Parkway ensure that cargo moves more efficiently and without delay.