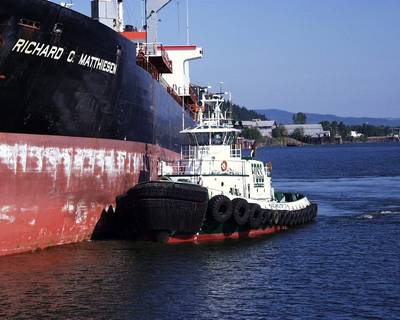 Foss Maritime has been recognized by the ILWU Marine Clerks Local 52 for zero injuries at Terminal 5 between March 2015 and February 2016. The first-ever Safety Award given by ILWU was presented to Foss and partners Shell and Jones Stevedoring at the ILWU's Annual Safety Banquet held in Sea-Tac, Wash. yesterday.
"We are extremely honored by this award," said Paul Stevens, CEO and president of Foss. "It's a real credit to the hard work of our dedicated Foss employees and also to our stevedore partner Jones Stevedoring, and to the trust of our customer, Shell."
Terminal 5 is the second largest terminal in Seattle, Wash. and offers a variety of equipment and services to support intermodal, break bulk and project cargoes. It is a unique location as it can be accessed by deep sea vessels, by barge, by rail and by truck. By the close of 2015 Foss had accumulated about 168,000 people hours at Terminal 5, without an injury.
"I really can't say enough about how great it was to work with the whole Foss group at the terminal. In my 20-year career at Jones I can't think of another single customer that has had such a positive impact on our organization," said Rob Bohlman, vice president of Jones Stevedoring. "From the first day at Terminal 5, Foss, Shell and Jones worked hard to establish a safety culture that went above and beyond the normal safety practices on the waterfront. And it goes without saying that without the efforts of the ILWU, and the support of Shell, none of this would have been possible."
Max Vekich of the ILWU Local 52 Labor Relations Committee in a letter announcing the award said, "Local 52 members embrace being part of Foss' Always Safe, Always Ready culture."
"It says an awful lot when your efforts are appreciated by those who are impacted the most, and when they see positive results from those efforts. Well done Foss and your team," said Dale Snyder, vice president of Alaska Operations for Shell.
• Alaska • Paul Stevens • Washington