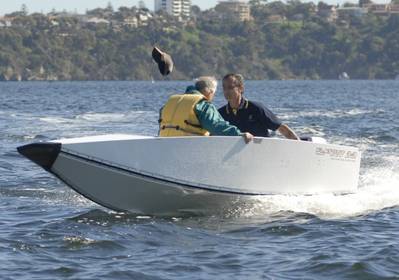 Just one month after officially commencing operations, Australian company Quickboat Holdings Pty Ltd is now focused on the commercialization of its folding boat that is globally unrivaled in design, quality and price.

Quickboats are uniquely designed folding boats that can be assembled in less than one minute. They remove the need for a trailer, as they can be easily carried on a car’s roof racks, or inside caravans and mobile homes, secured in their own carry bags. When not in use they can be hung on a garage wall.

“After a successful fund-raising campaign, Quickboat Holdings Pty Ltd is now owned by 25 shareholders” explained Deryck Graham, Quickboats CEO. “We have established a board of directors, appointed a company secretary, and legal advisors. On a corporate level, we are on track.”

The company’s website, Quickboats.com, has also been launched. “It is has been the buzz created by social media that has confirmed our faith in Quickboats” said Mr Graham. “Even though the first Quickboats won’t be available until late 2013, we have already received over 3000 expressions of interest and over 200 requests to join the purchaser queue - a number that is growing daily.”

In entering this new phase of operations, Quickboats will be liaising with its industrial designers and composite development specialists, with the aim of having prototypes operating by Q2 2013.

In 2012 Quickboat Holdings Pty Ltd acquired all of the initial technology for Quickboats from Quickstep Holdings Ltd, a public listed aerospace company specializing in advanced composite manufacturing and technology development.