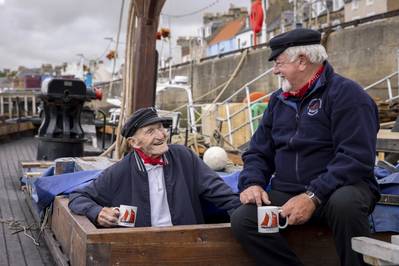 Following a £1million conservation, the Scottish Fisheries Museum in Anstruther, Fife, is set to welcome visitors back onboard the iconic ‘Fifie’ Reaper, the last of the great First Class Scottish Herring Luggers and a rare survivor from the golden age of sail.

One of the few vessels in the UK’s National Historic Fleet kept in seagoing condition, the two-masted, 70-ft., 50-tonne Reaper will open to the public on August 4 at her pontoon on Anstruther Harbour, once Scotland’s busiest fishing port.

The refurbishmen project, which has been recognized by the National Historic Ships UK 2020 Excellence in Maritime Conservation Award, began in 2018 and was made possible by funding from the Scottish Government, Museums Galleries Scotland and Oor Bairns Charitable Trust. The main contractor, Babcock International Group, also made a charitable donation.

The 118-year-old Reaper, which has starred on screen, most recently in the hit TV series ‘Outlander’ and film ‘Tommy’s Honour’, is of Carvel construction and built of oak and larch. She was built in Sandhaven, near Fraserburgh, in 1903, at the height of the worldwide boom for Scottish salt-cured herring.

Inspired by Viking longship design and powered by wind alone with their huge, heavy, square lugsails stretching over 3,355 sq. ft. and sleek hulls, ‘Fifies’ became the most popular fishing vessel on Scotland’s North Sea coast during the 19th and 20th centuries.

The Reaper at Work
Although ‘Fifies’ looked effortless and graceful when under sail, leaving harbour and turning with the sun in long-held tradition, managing the heavy gear and herring nets, which extended a mile long, was physically demanding and skilled work for the crew of ‘8 men and a boy’.

On shore, the Reaper, which held the Shetland record for a catch of 223 crans (almost 250,000 herring) in the 1930s, supported various industries. These included the ‘Herring Lassies’ who gutted 60 herrings a minute on the gutting tables or ‘farlans’ before packing them in salted barrels for export to Europe.

Highlights of the project to refurbish the historic shiop include strengthening work which has given the Reaper the strongest hull of any ‘Fifie’ ever built, even during the heyday of these great First Class Scottish Herring Luggers, and a new 67-ft. Fore Mast.

The new Fore Mast, which will be installed in Autumn, represents a change in manufacturing tradition for ‘Fifie’ boats from simple Douglas Fir poles to a mast laminated from Douglas Fir giving both increased strength and a longer life.

Work also included installation of a new air compressor to power the original steam capstan, which has helped crew handle the Reaper’s heavy gear since it was made in the 1920s by McDonald Brothers of Portsoy.

Volunteers at the Scottish Fisheries Museum’s Boat Club, which helps maintain and sail the Reaper, have also contributed over 700 hours to date to the final phase of works. This phase, which is still ongoing, includes the remaining internal refit, reinstating the crew cabins, galley, display areas and navigational aids.

Click here for more information on the ship and museum.