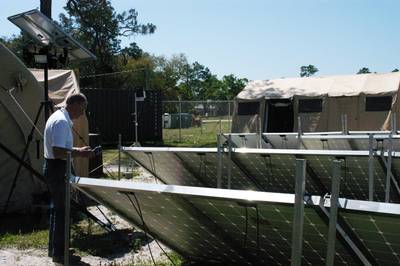 Together, leaders from MARCORSYCOM and NSWC PCD analyzed the COCs they noted that almost 70 percent of all the energy was being used to heat and cool the shelters.  Additionally, all of the predictions were based upon vendor specifications or calculations.  The engineers thought there was a better way.

A new computerized model allows users to incorporate shades, radiant barriers, and tent colors into the heat transfer calculations to determine the need for heating and air conditioning, Since the model utilizes a weather input file, it can predict tent temperatures anywhere in the world, thus allowing field units to predict supply needs before deployment. The new algorithm and model have been shared with the U.S. Marine Corps and the U.S. Army for consideration of use.

The Energy Team is presently completing an Analysis of Alternative for Hybrid Power Systems that will result in new power systems for the U.S. Marines.  One of the hybrid solutions is a U.S. Army micro-grid that utilizes six, 60 kw generators that are switched on or off as needed.  NSWC PCD is expected to receive one U.S. Army micro grid for project testing in the summer of 2013.