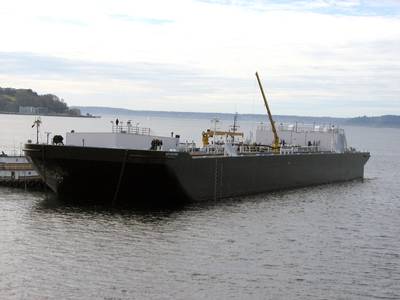 Elliott Bay Design Group LLC (EBDG) recently announced the launch of the flagship vessel in its series of oil barge designs for Harley Marine Services (HMS).  With a length of 422 ft and a beam of 76 ft, the Sixty Five Roses has a capacity of 83,600 barrels.

The vessel features a cargo heating system; two hose handling cranes, one of which is a jumbo crane for lifting offshore submarine hose connections and five hydraulic mooring winches designed for offshore mooring systems. The design also includes a vapor recovery system with provisions for the future addition of a self-contained vapor processing unit aft of the machinery house.  This self-contained system, developed and patented by HMS, enables the vessel to load petroleum products without the need for a shore-side connection.  The design also provides for the future addition of an ATB connection system.

This construction-friendly design was tank-tested and optimized for efficient towing.  HMS invested in a tow tank testing program to optimize the performance of the hull and reduce fuel consumption, with an eye toward reducing their carbon footprint.  The Sixty Five Roses was built by US Barge and entered service this spring.