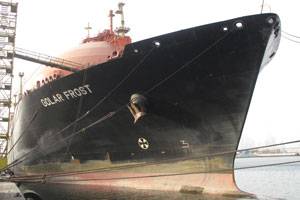 Drydocks World - Dubai, a ship repair, conversion and new building yard and the flagship company of Drydocks World, announced that work is underway on its first ever Floating Storage Re-gasification Unit (FSRU) conversion project, known as the FSRU LIVORNO Project.

The conversion of the Liquefied Natural Gas (LNG) carrier, Golar Frost into an FSRU, is being handled by the Main Contractor, Saipem, a leading international turnkey contractor in the oil and gas industry and will be delivered to OLT Offshore LNG Toscana, a company operating in the Italian gas industry.

FSRUs are floating terminals where LNG is stored before being re-gasified on board. Golar Frost will be converted into a floating LNG receiving terminal of FSRU type to be permanently moored offshore Livorno, Italy, approximately 12 miles from the coast in a water depth of about 120 metres and connected to shore through a gas export pipeline.

FSRU conversion is one of the very few such projects undertaken by ship yards across the world.  Drydocks World - Dubai began work in June 2009 and plans to complete it by mid 2010. The conversion of the Liquefied Natural Gas (LNG) carrier includes fabrication and installation of structures such as turret mooring system, aft thruster compartment, foundations of cranes and loading arms, bilge keel and foundations for equipments. In addition, the unit’s external hull, deck and outfitting will be blasted and coated.

The project also involves the installation of a side by side berthing mooring system for the LNG carrier, a loading system (i.e. loading arms), LNG transfer system to regasification plant, a process plant for regasification, utilities including power generation and sea water systems, control, automation and communications systems.