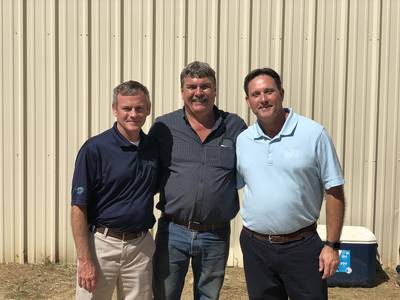 On October 16, 2018, after 38  years in the dredging industry, David Miller, SVP/COO and part owner of DSC Dredge, LLC  announced his retirement.

Miller embarked on his career in the early 1980’s when he began working for Kenner Marine & Machinery (KMM). Following several consecutive KMM positions, David completed his final 10 years there as a field service specialist.

Miller was one of the original founders of Best Equipment Technologies, Inc. (BEST), established in 1998, located in Poplarville, MS. BEST operated as a steel fabrication shop and dredge manufacturer. Partnered with the Wetta family, Miller helped found companies that provided essential services to the dredging industry. In 2010, these companies were consolidated into DSC Dredge, LLC (DSC) and the group forged ahead, enhancing its reputation as a world leader in the manufacturing of portable cutter suction dredges.

With his career in the dredge manufacturing industry affording the opportunity, Miller remains an avid traveler today. Bob Wetta, DSC President and CEO explained, “David can boast that he has visited all 50 USA states, as well as over 50 countries. We are proud to recognize David for his unconditional dedication, commitment and hard work.”  Wetta continued, “David Miller will be deeply missed, yet we can only feel happy for him after his many years of expert service.”  Fellow owner Bill Wetta, Senior Vice President of Product Development and Chief Technology Officer added, “DSC Dredge is simply a better company because of David’s valuable contributions and incredible impact made during his career and within our company.  On behalf of everyone at DSC, we wish David the very best.  May this next chapter of life continue to allow new adventure and continued travels!”