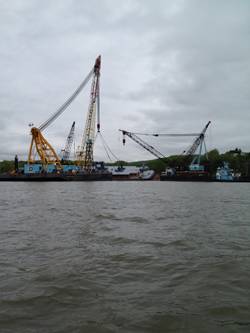 After a competitive bidding process, in late March 2012 Donjon Marine was awarded a job to refloat the 277-foot Ex-Staten Island, NY car ferry Gov. Herbert H. Lehman.   The vessel sank in the Hudson River while in layup in Newburg, NY.  After almost four weeks of patching and test-pumping the submerged hull, and with the use of Donjon’s 1000-ton capacity Derrick Barge Chesapeake 1000 to stabilize the vessel during refloating, the ferry was successfully refloated and returned to owners.

“This is just another example of Donjon’s ability to perform in a professional and cost-effective manner.  Donjon Salvage Master Bill Kratz and his salvage team have illustrated once again Donjon’s ability and dedication to the continuing salvage needs of the marine community,” said John Witte, Jr., Executive Vice President.