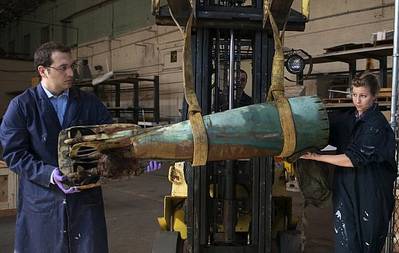 "The Howell torpedo was very important in the development of submarine warfare," said Alexis Catsambis (PhD), NHHC UAB archeologist and cultural resource manager. "In the mid-19th century we get the beginnings of propelled submarines and towards the end of the 19th century we start getting torpedoes that extend the range between vessels in battle. By the turn of the century we are looking at over the horizon battles.  The torpedoes are sort of the beginning of that phase."

The torpedoes are a rare find and all of the known Howell torpedoes now belong to NHHC museums.   "There were only 50 in existence, and we now have the third one that is still around today," said Blair Atcheson, NHHC UAB Historic Preservation and Outreach Coordinator. "There is one at the Naval Undersea Museum and one at the Naval War College."

The Howell torpedo, named for Lt. Cmdr. John A. Howell, the primary contributor, was developed between 1870 and 1889. The Howell, the first propelled torpedo, was 11-feet long, made of brass and It had a range of 400 yards, a speed of 25 knots, and a warhead filled with 100 pounds of explosive.