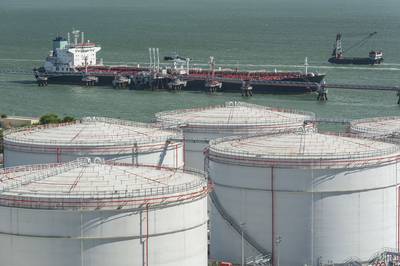 Several tankers carrying diesel fuel are floating off Taiwan and Southeast Asian waters as a steep fall in oil prices kept buyers at bay, trade and shipping sources said on Friday, helping push rates to their highest since January 2016.

With tanker rates also boosted by strong Chinese oil exports, it was a big relief for an industry that has been in the doldrums for the past three years.

About seven to nine long-range tankers carrying about 5 to 7 million barrels of diesel are currently floating off Taiwan waters largely due to a drop in bunker fuel demand from the South China Sea, several trade and shipping sources said.

"When flat prices started dropping rapidly, the buyers pulled back as they think prices have not bottomed out," a Singapore-based middle distillates trader said.

The two global oil benchmarks, North Sea Brent and U.S. crude, had their weakest month for more than 10 years in November, each losing more than 20 percent as global supply outstripped demand.

Typically, the fourth quarter is peak demand season for middle distillates, a group of oil products including diesel used in agriculture, industrial and power sectors.

"This year has been highly unusual and I think much of it has to do with the trade war impacting the Chinese economy and in turn diesel demand," a North Asian trader said.

"The traders storing diesel in vessels bought the cargoes earlier to sell to end-users but demand has not been as good as expected."

The Ocean Explorer, carrying nearly 110,000 tonnes of diesel, has been anchored at Kaohsiung Central anchorage since Nov. 26 while AG Neptune, carrying about 105,000 tonnes of gasoil, has been floating off Taiwan and more recently in Malaysian waters since mid-October, Refinitiv Eikon shipping data showed.

Storage of clean oil products has also been filling up due to weak demand for gasoline, which is competing for tank space in onshore tanks, the North Asian trader said.

'FEELS LIKE CHRISTMAS'
Storage of oil products on ships has pushed the rates for long-range 2 vessels on the benchmark Middle East Gulf to Japan route to about $30,000 a day, double what it was a week ago and the highest since January 2016, said Ralph Leszczynski, head of research at shipbroker Banchero Costa in Singapore.

China's increased exports of oil products after Beijing issued more export quotas for state refiners also helped lift tanker rates, a Singapore-based shipbroker said, declining to be named as he was not authorised to speak with media.