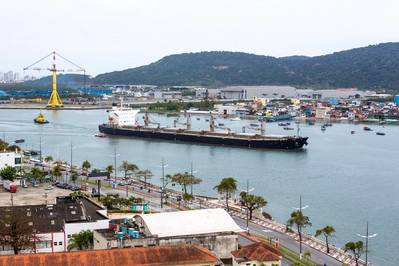 Global demand for Brazilian grains is growing as Argentina and Paraguay struggle with low water levels in a key river for agricultural shipments that is preventing ships from being fully loaded, a Brazilian trading company told Reuters on Thursday.

Chief Executive Frederico Humberg of trading firm AgriBrasil said the company has sold three shipments of Brazilian corn where the buyer had initially sought to buy from Argentina.

"The buyer had purchased in Argentina, but ended up reverting to Brazil," Humberg said.

Humberg said he knew of 10 shipments in total between AgriBrasil and other suppliers that had similarly substituted Brazilian grains for buyers originally seeking to source in Argentina.

An increasing number of ships carrying Argentine and Paraguayan grains have been running aground in the Parana river, which is at its lowest point in decades because of drought.

On Thursday, a ship belonging to Chinese exporter COFCO, hauling 42,000 tonnes of soymeal, ran aground and was blocking traffic at a river port in the Argentine grain shipping hub Rosario, according to port officials.

"With the deteriorating situation in Argentina, demand has risen for Brazil, mostly for June and July cargoes," Humberg said.

Some boats along the Parana river are cutting their normal grain loads by 10,000 tonnes to account for lower water levels.

Humberg said that this raised the possibility that grains ships, once clear of the river, could travel up the coast to Brazil to "top-up" their ships with the additional grain to their usual levels; although, he did not cite instances of that already happening.

But vessels attempting such a maneuver would face potential waits at Brazilian ports as Brazil is in its high season for shipping grains and sugar.

Sergio Mendes, head of Brazil grain exporter association Anec, said top-ups had been used in years past, but he did not know of recent examples.