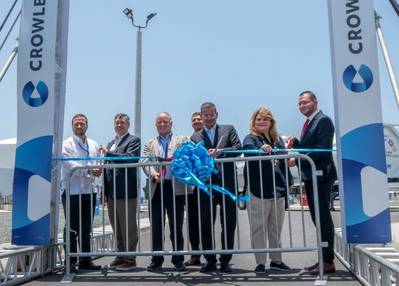 “We continue to expand our capacity and investment in Puerto Rico with the opening of this special facility, which enhances Crowley’s LNG capabilities across diverse industries,” said Tom Crowley. “Our LNG solutions allow industrial and commercial clients to plan, monitor and produce their own energy while protecting their business from potential threats such as power outages or natural disasters.”

“As Puerto Rico moves forward on its quest to transform its dated and fragile electric generation system into a first-class energy network, the use of alternative and transitional fuels like LNG will be critically important in helping build resiliency and reliability into the system,” said Pedro Pierluisi, Governor of Puerto Rico. “Crowley’s new LNG Loading Terminal in Peñuelas will foster much needed new economic activity for municipalities in the island, and it will also position Puerto Rico’s industrial and commercial sector on a fast-track path toward economic growth by providing reliable and environmentally friendlier energy solutions. My administration is pleased to join in today’s milestone celebration, which further solidifies Crowley’s long history of serving the Puerto Rico market.”

The facility will significantly grow Crowley’s service capabilities in Puerto Rico, delivering more than 94 million gallons of LNG annually. When operating at full distribution capacity, it will help power an aggregate of 120MW in cleaner energy while helping to reduce carbon dioxide and sulfur emissions.

“The inauguration of Crowley’s new LNG Loading Terminal marks an important step toward the diversification of Puerto Rico’s energy industry, allowing us to maximize the use of alternative fuels like LNG to usher the island into a new era of cleaner energy,” said Jenniffer Gonzalez, Puerto Rico Resident Commissioner.

“The investment in these state-of-the-art facilities will also afford Puerto Rico the opportunity to play a strategic role in LNG national security efforts while leveraging new LNG technologies and economic development opportunities.”

Functionally, from Peñuelas, operators will load natural gas in its liquid form onto 10,000-gallon ISO containers for over-the-road transport to customer facilities around the island. Upon arrival at the customer’s site, the LNG will be re-gasified and used for power generation and energy consumption.