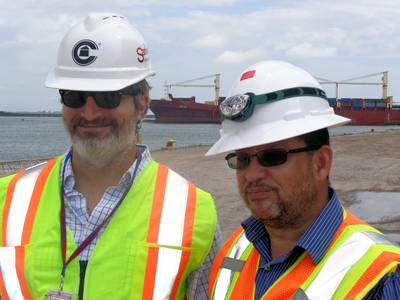 Specifically, Crowley has supplied emergency shipping, warehousing, trucking, stevedoring, customs brokerage and other logistics capabilities, first to the U.S. Government’s Defense Logistics Agency (DLA) and now to the U.S. Army in both Liberia and Senegal, Africa. These efforts have supported the more than 3,000 deployed U.S. troops and made possible the construction of 17 fully stocked, remote Ebola treatment centers.

The mission began in September, when Crowley’s Bleu Hilburn, director, logistics, received notice that logistics support in West Africa was needed. Within a week, the company had personnel on site and chartered the container ship Vega, a fast and safe transportation option that provided the cargo carrying capacity of 17 C17 Globemaster military transport aircrafts in a single run from Germany to the staging area of Dakar, Senegal, and final destination in Buchanan, Liberia. The company also established eight warehouses for the distribution of humanitarian aid and construction supplies and trucked more than 4,000 loads of cargo to remote construction sites in Liberia. Crowley’s work in both Liberia and Senegal continues for the U.S. Army, even as the mission winds down.

“The comprehensive response we are providing to the U.S. Government in support of Operation United Assistance is not only critical but is, most importantly, saving lives,” said Crowley’s Frank Larkin, senior vice president and general manager, logistics. “We are pleased to have been able to participate in a mission with such a noble purpose.”

Last year’s Ebola outbreak in West Africa raised concerns of a global pandemic, with fear that the virus could make its way to Europe, Asia and the United States quickly. In response, the U.S. Government dedicated $6.2 billion and thousands of troops to provide command and control over the outbreak, logistics training and engineering support for the construction of specially designed medical facilities in the hardest hit areas.