Container Shippers Ordered to Testify in US Investigation 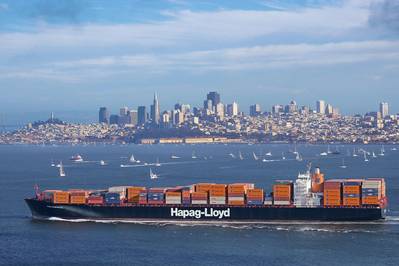 The U.S. Justice Department has ordered top executives from several container shipping lines to testify in an antitrust investigation into an industry that is the backbone of global trade, the companies said on Wednesday.
The world's biggest container shipper, Denmark's A.P. Moller-Maersk, Germany's Hapag Lloyd, Taiwan-based Evergreen, Hong Kong-based Orient Overseas Container Line (OOCL) said their executives were among those who had been subpoenaed.
The United States is concerned that the proposed alliances of several major companies, covering about 45 percent of all global shipping capacity, could lead to anti-competitive behaviour.
This could slow global trade as about 90 percent of the world's traded goods by volume are transported by sea with over 60 percent by value, or $4 trillion, on container ships. The rest is on other vessels such as oil or gas tankers.
There have been high-profile bankruptcies in the container industry as trade has slowed due to weaker economic growth.
The shippers have tried to save money by setting up alliances to pool their ships co-ordinate sailing schedules and port calls but critics say this can lead to reduced services and increased prices for customers.
The subpoenas were issued during a meeting of top container shipping executives last week in San Francisco. They are members of the International Council of Containership Operators, commonly known as the Box Club.
"We can confirm that we conducted an operation," an FBI spokesman in San Francisco told Reuters on Wednesday. "It is part of an ongoing investigation and we are unable to release any additional details at this point."
The U.S. Department of Justice declined to comment.
Maersk Line and Hapag Lloyd confirmed that they were issued subpoenas related to a probe into the container shipping industry.
Spokesmen at both companies said that the subpoenas did not set out any specific allegations and that the companies would fully cooperate with authorities.
Shares in Hapag dropped 6 percent to 28.5 euros while Moller-Maersk shares declined 3 percent to 11,390 Danish crowns.
OOCL and Evergreen also confirmed they were involved.
"OOCL has received a subpoena from the Department of Justice Antitrust Division calling for the production of documents. OOCL intends to comply fully with the subpoena," said Stephen Ng, OOCL Director of Trades.
The Evergreen spokesman said: “We are cooperating with the authorities in this matter. Evergreen's policy is to conduct business in compliance with applicable competition laws.”
The Hapag Lloyd spokesman said that its planned takeover of United Arab Shipping Company (UASC) would not be affected by the probe.
Alliances in the Spotlight
The Justice Department has raised concerns over possible anti-competitive behaviour by container shippers with the U.S. Federal Maritime Commission (FMC) after shippers sought approval to form the OCEAN and THE alliances.
The proposed OCEAN Alliance involves CMA CGM with APL, China Cosco Shipping, Evergreen and Orient Overseas Container Lines while THE alliance is planned between Hapag Lloyd-UASC, Yang Ming Marine, Mitsui OSK Lines, Kawasaki Kisen Kaisha and NYK Lines.
In a letter to the FMC in September, Renata Hesse, acting assistant attorney general in the Justice department's antitrust division, urged the FMC to prohibit or insist on changes to the Ocean Alliance agreement.
"The parties to the proposed agreement are seeking to undertake joint activities that are likely to reduce competition and also may be inconsistent" with the U.S. shipping act, Hesse said in the letter, which was published on the Justice Department website.
The Hong Kong Shippers' Council, which represents manufacturers and exporters, said it welcomed the probe.
"We look forward to hearing their result,” chairman Willy Lin said.