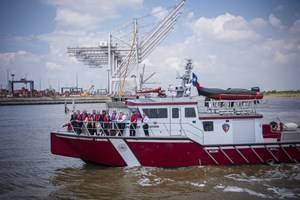 The Port of Houston Authority hosted Congressional leaders on port matters for a facilitated visit and tour of the Port of Houston, Friday, June 5.
Congresswoman Janice Hahn, Congressman Ted Poe and Congressman Brian Babin visited the Port of Houston and learned more about the national impact of the Port of Houston overall and in particular its safety and security measures.
The visit was arranged upon the invitation of Congressman Poe, who along with Congresswoman Hahn co-chair the PORTS Caucus, which represents more than 100 ports across the nation.
A delegation that included Port of Houston Authority Port Commissioners John D. Kennedy and Stephen DonCarlos, along with federal partners Captain Brian Penoyer, Commander, U.S. Coast Guard Sector Houston-Galveston and Leslie Fleming - Luczkowski, Assistant Port Director, U.S. Customs and Border Protection (CPB) and Captain Mike Morris, Presiding Officer, Houston Pilots visited Shell's Deer Park refinery before taking a tour by boat of the Houston Ship Channel.
The tour highlighted unique aspects of the nation's busiest port. CBP provided the group a demonstration of its Vehicle and Cargo Inspection System (VACIS) at the Port Authority's Bayport Container Terminal.
The Port of Houston considers itself an economic engine for the nation, generating nearly $500 billion of national economic activity and 2.1 million American jobs. It is the leading export port in the nation of petrochemical and energy products.
The Port of Houston has a robust and successful port security program that is based on the collaboration and cooperation of the 150 individual companies and terminals that comprise the overall port. The tour allowed members to see firsthand how the port functions and collaboratively coordinates safety and security measures. The Port of Houston Authority noted that it works closely with all its partners on the federal, state and local levels, as well as those in the private sector.
• Brian Penoyer • energy products • Houston Authority