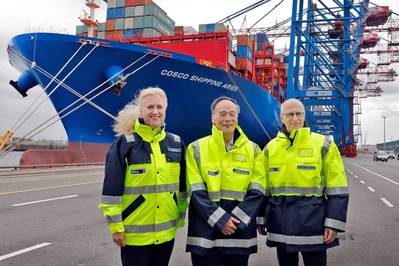 The largest container vessels of Chinese shipping company Cosco Shipping Lines are handled at the facility of Container Terminal Tollerort every week.

On Thursday, for instance, the Cosco Shipping Aries was docked at the CTT quayside. This 400-metre-long mega-freighter has been calling at Tollerort since February 2018 and operates between northern Europe and the northern Chinese economic regions of Ningbo, Shanghai, Qingdao, Dalian and Tianjin as part of the weekly AEU3 Far East service of the Ocean Alliance.

Wang spoke with the crew of the ship, and heard about the long-standing close relations between the shipping company (whose European headquarters are in Hamburg), the metropolitan area and HHLA from Captain Jin Zhiyi, Cosco Executive Board member Liu Hongwei and the head of Cosco Europe Lin Ji.

The visit of the Chinese Vice President emphasises the great significance of the People’s Republic of China to Hamburg as a port and commercial city. Hamburger Hafen und Logistik AG has been doing business with Chinese companies such as Cosco for more than 35 years. On 27 August 1982, the first freighter from China docked at what was then Shed 91 at Tollerort. In February last year, the very same Cosco Shipping Aries that is docked at the quay wall today became the first vessel with a capacity of more than 20,000 TEU to dock at Container Terminal Tollerort.

The People’s Republic of China is, by far, the strongest trading partner of the Free and Hanseatic City of Hamburg. Almost a third of containers handled at the terminals either come from or are destined for China. Fifteen liner services connect Hamburg with Chinese ports. Three Cosco container services alone are processed every week at CTT: two Asian services and one for the eastern Mediterranean.

In discussion with the Chinese Vice President, the Chairwoman of HHLA’s Executive Board manifested her company’s considerable interest in expanding its business activities with China. “China has launched an ambitious logistics offensive. With the New Silk Road, the country is demonstrating that it considers trade with Europe as a project for both current and future generations. With its customers, HHLA develops logistical and digital hubs for the transport flows of the future. As such, we want to play a role in shaping the ,One belt, One road‘ initiative from a business perspective – and that’s exactly what we will do,” stressed Titzrath.

In this regard, she referenced the letter of intent, signed the day before, envisaging stronger collaboration – such as in terms of hinterland traffic and intelligent port technology – between HHLA and the company operating the port in Ningbo-Zhoushan. This area, located in the eastern Chinese province of Zhejiang, is currently the world’s third-largest container port.