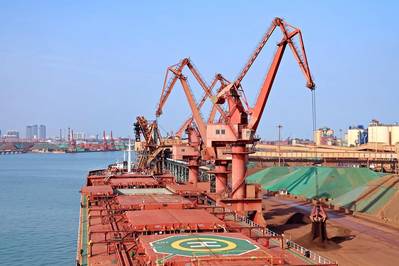 The world’s top iron ore consumer imported 106.74 million tonnes of the steelmaking ingredient in October, 14.9% more than in October 2019, but still below the 108.55 million tonnes brought in during September, according to data from the General Administration of Customs.

October iron ore imports were supported by increased arrivals from Brazil and South Africa. According to Refinitiv vessel-tracking data, arrivals from the two countries last month rose 7% and 15.7%, respectively.

China's portside inventories had piled up for six consecutive weeks to 128.95 million tonnes as of Nov. 1, data compiled by SteelHome consultancy showed.

Meanwhile, as most mills have completed environmental upgrades to meet emission standards, steel producers in northern China are also expecting fewer disruptions to their production this winter.

But with weaker seasonal demand in the fourth quarter and low profit margins for steelmakers, domestic demand may have peaked, CITIC Futures wrote in a note.

Steel trade
China shipped out 4.04 million tonnes of steel products in October, the customs data showed, up from 3.83 million tonnes a month earlier.

The China Iron and Steel Association anticipated steel exports to recover and imports to drop in the last quarter on an overseas market recovery and narrowing price spreads.