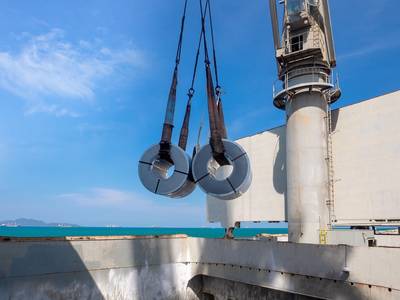 It's round one to China in its efforts to cool the red-hot iron ore and steel sectors, but victory in future rounds largely depends on making increasingly harder choices, and hoping factors beyond its control work in Beijing's favor.

The catalyst for the chill was reports that China's government will strengthen what it termed the management of commodity supply and demand to curb "unreasonable" increases in prices - action that has so far seen the spot iron ore price retreat by almost 15% since its record high of $235.55 a tonne on May 12.

The spot price of iron ore for delivery to North China, as assessed by commodity price reporting agency Argus, dropped to $200.90 a tonne on May 21, a third consecutive losing session.

The selling continued on Monday, with the most-traded iron ore contract for September delivery on the DCE sliding as much as 9.5%, almost hitting the day's downside limit of 10%. That left it at 1,016 yuan a tonne, its weakest since April 15.

What China's pledged action means in practice is stepping up supervision of trading and trying to manage stockpiles of commodities, coupled with efforts by exchanges to raise the cost of trading.

In some ways this amounts to more talking the market down, with Beijing using its considerable powers of persuasion to try and force market participants to toe the line for what it deems to be the greater good.

The question is how long will this tactic work, especially if it isn't matched by more concrete steps to boost supply of commodities or limit their demand?

Record steel output
China buys about 70% of total seaborne iron ore and produces roughly half of the world's steel output.

So far this year it has been sucking up as much iron ore as it can get in order to produce record amounts of steel, as the economy benefits from the stimulus measures put in place to boost the recovery from the impact of the coronavirus pandemic.

Iron ore imports are up 6.7% in the first four months of the year to 381.98 million tonnes, according to official data.

The gains in steel output defy repeated assertions by Beijing that annual production this year will be below the 1.065 billion tonnes produced in 2020, part of China's efforts to limit pollution from the energy-intensive steel-making process.

It's also hard to believe that iron ore and steel prices in China will slide dramatically if the country continues to pump out steel at the current rates.

Equally, it's not the case that vast stockpiles are being built up. Iron ore port inventories, as monitored by SteelHome, rose to 128.35 million tonnes in the week to May 21 - up slightly from the prior week's 128.30 million but down from this year's peak of 135.9 million in late April.

Steel rebar inventories have declined for the past 10 weeks, dropping to 7.24 million tonnes in the week to May 21, and are now 38% below the peak of 11.55 million tonnes from the week of March 12.

World demand, supply issues
The other factors beyond China's control including rising iron ore demand in other importers, and ongoing issues with supply, especially from number two exporter Brazil.

South Korea, the third-biggest importer in Asia, brought in 6.79 million tonnes in April. That was down from 7.32 million a month earlier, but March's total was the highest since October 2015, and even the April outcome was stronger than any month from January 2020 onwards, with the exception of March and November 2020.

On the supply side, Refinitiv data showed Brazil shipping 25.75 million tonnes in April, down from March's 27.54 million and well below the 34-35 million tonnes per month being achieved in August and September last year.

Top exporter Australia shipped 71.28 million tonnes in April, down from 76.73 in March as a cyclone struck the main producing area in Western Australia state. A recovery is predicted, but the current volumes are still some way below the monthly potential of above 80 million tonnes.

Overall, it's hard to see a sustained decline in the price of seaborne iron ore until several factors start to come together.

Supply will have to return to closer to maximum levels, and China will actually have to reduce steel output. The X-factor is rest of the world demand for iron ore, and so far in 2021 that looks like a solid growth story.