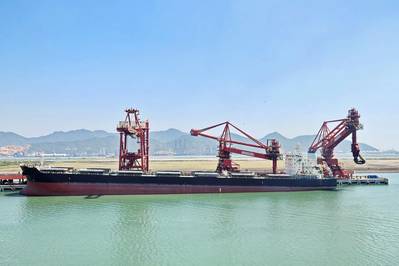 China's iron ore imports in April rose 11.4% from a month earlier on robust demand from steelmakers, as downstream sectors started to emerge from lockdowns to contain the coronavirus epidemic.

Arrivals of the steelmaking ingredient were 95.71 million tonnes last month, data released on Thursday by the General Administration of Customs showed.

That compares with imports of 85.91 million tonnes in March and 80.77 million tonnes a year earlier, when shipments from Brazil's top miner Vale SA were disrupted after a tailings dam disaster.

Reuters reported a higher number earlier for April based on figures released in a customs statement which rounded January-April purchases to 360 million tonnes.

"On a monthly basis, imports jumped as shipments from big miners were typically lower in the first quarter due to seasonal factors like weather conditions," said Zhao Yu, an analyst with Huatai Futures.

Vessel-tracking and port data from Refinitiv showed arrivals of iron ore in April from Brazil jumped 12.7% from a month earlier, while imports from Australia edged up 0.7%.

The spreading coronavirus pandemic has forced some steel producers in Asia to cut output in response to deteriorating demand.

However, Chinese demand for ore has been fuelled by mills ramping up production on an early recovery in construction activity and expectations that more government stimulus for infrastructure will revive consumption.

Capacity utilisation rates at blast furnaces in 247 mills tracked by consultants Mysteel rose for a seventh straight week to 81.68% as of April 30, up from below 74% in mid-March.

The customs data on Thursday also showed exports of steel products in the first four months of 2020 fell 11.7% from a year earlier to 20.6 million tonnes.

The China Iron and Steel Association warned last month that impact on Chinese steel exports from the global pandemic will be centralized in the second quarter due to sluggish demand for both intermediate products and finished goods containing steel.